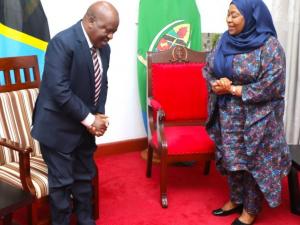 Dar es Salaam. The Speaker of the National Assembly Job Ndugai has made a public apology to President Samia Suluhu Hassan following claims he made earlier last week that Tanzania risks being auctioned due to rising national debt.
Last week a video clip went viral showing the Speaker criticising the government's borrowing trend, saying it was unhealthy.
However, issuing the apology he claimed that the video clip was edited to put tension between him and the president.
"If I have uttered any word to discourage the President in her efforts to rebuild the country, I apologise to her and to all Tanzanians in general," Ndugai said while addressing journalists on Monday in Dodoma.

Ndugai said there is nothing he can do to discredit the government’s efforts to rebuild the economy.

"I decided to come and put things straight, in my previous speech there was nothing related to disregarding any government efforts. We need the government and we will support it," he affirmed.

In the short video clip that has made rounds online and led to public debate, the Speaker is seen presenting his argument that Tanzania cannot rely on the borrowing mechanism to fully support its grand strategic infrastructure projects.
He instead suggested increased internal revenue collections through various charges, listing mobile money transactions levies as an example.
He cited the Sh1.3 trillion grant [sic] which he said had contributed to the swelling of the national debt. The Speaker said the same government was financing schools and health infrastructure projects using the country’s own charges and levies.
“Is it proper for us Tanzanians to continue borrowing and increasing the national debt which currently stands at about Sh70 trillion, or are we going to agree to carry the burden ourselves?” he wondered.

“Should we continue borrowing and singing praises once we get the loans or should we continue charging levies whether the people are ready or not but the end goal being we build our own infrastructure using our own money?” he questioned.

Adding a political attachment, Ndugai wondered whether come the year 2025, Tanzanians would still decide to elect leaders that were in favour of borrowing or those that want to use domestic revenues for projects.