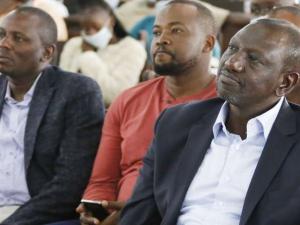 Deputy President William Ruto has called for tolerance and forgiveness for the sake of peace in the country.

Speaking during a church service yesterday at the African Inland Church in Bomani in Machakos town, Dr Ruto said the country should stay united and embrace tolerance especially in places of worship.

“I ask for forgiveness and also forgive those who have wronged me,” said Dr Ruto.

“I apologise on behalf of the government because some individuals who work for the government threw tear gas inside a church in Murang’a. Other meetings to fundraise for churches in Nyamira and Kakamega were also tear-gassed,” he said, adding that the acts have no place in a country that claims to fear God.The DP urged the church leaders and all believers to pray for the country.

“Without prayers made to God in churches, the Jubilee government would not have been there in the first place. This government should not be the one undermine God’s word,” Dr Ruto said.

Makueni Governor Kivutha Kibwana, while speaking at the same forum, urged the DP to stand firm in pursuing the “Hustler Nation” dream.

Prof Kibwana urged Kenyans to resist any move to return the country to the dark days of dictatorship, saying respect for freedom of association and speech as contained in the constitution must be protected.

“Speaking as one who fought for the new constitution, I am not happy that it’s not being respected,”he said. He added that he foresaw the country coming into great problems.

Mwala MP Vincent Musyoka said those in power should stop using state machinery to intimidate others and especially those attending church to worship God.

“Where is the logic in stopping the DP from attending a church service while allowing others the freedom to do so?” Mr Musyoka posed.

Lang'ata MP Nixon Korir reiterated the DP’s call for tolerance: “Freedom of worship should be applied to all,” he said.

He noted that former Prime Minister Raila Odinga on Saturday held a meeting and wasn't disturbed.