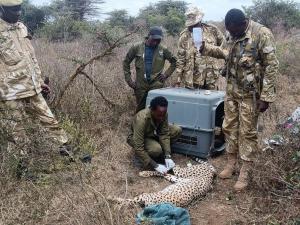 A stray cheetah that wandered out of Nairobi National Park on Saturday morning into the densely populated Ruai area in Machakos County has been captured by Kenya Wildlife Service (KWS) warders.

In a statement, KWS confirmed the incident, saying that they received reports from residents that a leopard had been spotted in Ruai.
“This morning, a cheetah that residents had mistaken for a leopard was spotted in Ruai. KWS promptly dispatched rangers and a veterinary team to the scene after being alerted by people,” they said.

According to KWS, they were led by boda boda riders to a mabati shed confirming that the animal was a cheetah and not a leopard as reported. KWS said that the cheetah was fatigued fater being chased by residents of Manyata area in Ruai.
“The team successfully tranquilized, captured, transferred and released her in to Nairobi National Park,” KWS said.
KWS ear notched the feline on its left ear for ease of identification and named her Ruai as per the request of the community members who spotted her.

In May, there was tension in Muritibu village, Meru county after residents allegedly spotted a ‘lion’ hiding in the hedges. KWS was informed and three armed wildlife officers rushed to the village of Kinyana, a kilometre from the Mount Kenya National Park, to trap the animal, only discover upon arrival a carrier bag with that image of a lion’s face.

Last year, a stray lion was captured after it caused panic in Ongata Rongai, Kajiado County. KWS said the lion, a male sub-adult (an animal yet to reach adulthood) was spotted stuck between a concrete wall and iron sheets in the residential town. Members of the public then alerted KWS and a team of rangers who were dispatched to the scene managed to dart and subdue the animal.

In 2016, six lions escaped from the Nairobi National Park into Lang’ata estate were they attacked and critically injured a man along the Ongata Rongai-Kiserian road near Rimpa and in 2019, a man herding livestock was killed by a stray lion.

Kenya’s Nairobi National Park is the only national park that exists within a capital city in the world. Established in 1946, it is home to a wide variety of wildlife, including the endangered black rhino, lions, leopards, cheetahs, hyenas, buffaloes, giraffes and diverse birdlife with over 400 species, according to KWS.
https://nairobinews.nation.africa/stray-cheetah-captured-after-causing-p...