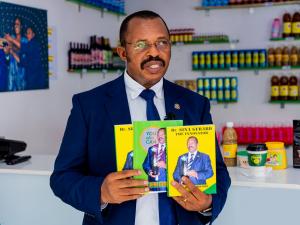 Sina Gerard, Rwandan serial and social entrepreneur, the owner, and manager of a food-processing company Urwibutso Enterprises, has shared his life journey, business journey and tips on how to star small and grow over time.
The three books entitled; Dr. Sina Gerard, the Innovator, its Kinyarwanda version that has around 200 pages, and You Also Can were unveiled to the 25th Rwanda International Trade Fair as he celebrates 25 years of attending the expo.

Sina Gerard, married, with five children was born in 1963, in Bushoki Sector, Nyirangarama Cell of Rulindo District in Northern Province. Nyirangarama became his nickname because of the impact of his business in his community.
Sina is known for his commitment to local development. The company he started in 1983, Urwibutso Enterprises, has grown from a small shop to multiple branches around the country and has now set good precedent in export.
“You see! I’m working but also ageing. I have started writing books; some are out and I will keep on writing in order to leave a good legacy. We shall all die but the next generation will learn through my books,” Sina told KT Press at the launch of his books.

Those books explain how he started with Rwf 33,000 back in early 80s when he was 20 years old with support of his parents.
“If people read my books, they will understand that there is no little capital to start with. People have to be determined, chase their dreams, have goals in whatever they do because giving up is no option. The youth have to stand up and work hard,” said.

Sina’s books show how his company has generated 280 full-time jobs and 600 part-time jobs in his village of Nyirangarama and across the country. The company works with an average of 3,000 families involved in farming.

To some of them, he offers microcredit, education, and agronomic training programs.
The impact of his work has been recognized internationally, and he has received many accolades from it. No wonder, that’s how he justifies his title of Doctor.
“But I worked for it,” he said.

His books also name all his products. The readers can have them from any Nyirangarama Branch, different libraries, at the Kigali International Airport, among other places, at an affordable price.
Besides being a businessman, Sina is grounded in social enterprise where he runs a primary school/secondary school where education is free.

He is know to be a man who tries and succeeds in every endevour; including, but not limited to pig farming, furniture workshop, bakery, and groceries.
He is also a philanthropist.
https://www.ktpress.rw/2022/08/succesful-entrepreneur-sina-gerard-tells-...