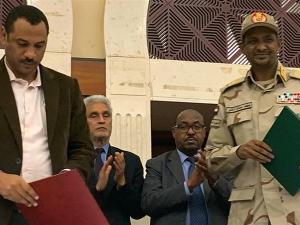 Sudan's protesters and ruling generals Wednesday inked a power sharing deal, paving the way for a civilian administration, a key demand of demonstrators since president Omar al-Bashir was deposed in April.

The two sides initialed a document called the "Political Declaration", an AFP correspondent reported, after intense talks through the night over finer details of the agreement.

The deputy chief of the ruling military council Mohamed Hamdan Dagalo -- who initialed the deal on behalf of the generals -- told AFP the agreement was a "historic moment" for Sudan.

"For the constitutional document we will resume talks on Friday," he told AFP.

The landmark power sharing deal, which was agreed on July 5, has been brokered by African Union and Ethiopian mediators after intense negotiations between the protest umbrella group and ruling generals.

The overall accord stipulates that a new transitional civilian-military ruling body be established, in a bid to end the country's months-long political crisis.

The governing body will have a total of six civilians and five military representatives.

The six civilians will include five from the umbrella protest movement, the Alliance for Freedom and Change.

A general will head the ruling body during the first 21 months of the transition, followed by a civilian for the remaining 18 months, according to the framework agreement.

That body is to oversee the formation of a transitional civilian administration that will govern for just over three years, after which elections would be held.

The breakthrough accord came after a political deadlock that gripped Sudan since the generals ousted Bashir in a palace coup in April, on the back of months of nationwide mass protests against his iron-fisted three-decade rule.

Tensions climaxed on June 3 when armed men in military fatigues stormed a longstanding protest camp in Khartoum, shooting and beating crowds of demonstrators in a pre-dawn raid.

Dozens were killed and hundreds wounded, triggering international outrage, although the generals insisted they did not order the violent dispersal of protesters.

Talks to fine tune the details of the deal since July 5 had been postponed several times at the request of protest leaders.