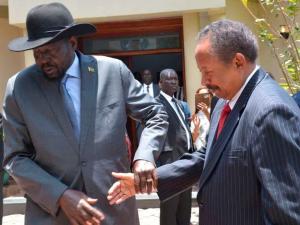 Sudan and South Sudan have agreed to open their borders after 11 years.

This was announced after a meeting between South Sudan's President Salva Kiir and Sudan’s Prime Minister Abdalla Hamdok according to President Kiir’s office.

According to a press statement seen by The EastAfrican at the weekend, the diplomatic meeting convened in Juba also resolved the re-opening of water transport.

“The two parties engaged in extensive talks and candid discussion on all aspects and fields of cooperation. The opening of four border crossing posts; Jebeleen-Renk, Meriam, Buram -Tumsah and Kharsana-Panakuac. The official launch will take place on October 1, 2021 by the two parties,” reads the joint press statement.

During Omar Bashir’s regime, South Sudan and Sudan closed most of the 2,000 borders – hitting traders and communities on both sides of the disputed line.

The borders were closed in 2011 when relations deteriorated after the south seceded following a long civil war, taking with it three quarters of the country’s oil.

In January 2016, President Omar Hassan al-Bashir of Sudan ordered the opening of his country’s border with South Sudan but this did not last.