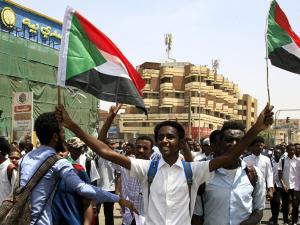 Sudan's military ruler has condemned the killing of five schoolchildren at a rally as protest leaders called off planned talks with the generals and thousands of students took to the streets to denounce the latest bout of violence.

"What happened in El-Obeid is a regrettable and upsetting matter and the killing of peaceful citizens is unacceptable and rejected and a crime that requires immediate and deterrent accountability," he was quoted as saying by the official SUNA news agency.

The UN children's agency UNICEF in a statement on Tuesday called on Sudanese authorities "to investigate and hold all perpetrators of violence against children accountable".

"No child should be buried in their school uniform," the agency said, adding the students killed were between 15 and 17 years old.

The two sides signed a power-sharing agreement on July 17, and were to sit down on Tuesday to discuss the powers of the joint civilian-military ruling council and immunity for generals over previous deadly violence against protesters. The killings came ahead of planned talks between the ruling Transitional Military Council and protest leaders on the remaining aspects of installing civilian rule following the toppling of longtime ruler Omar al-Bashir in April.

But negotiators for the Forces of Freedom and Change, the umbrella group that represents protest and opposition groups, told AFP news agency that Tuesday's talks would not take place because they were visiting El-Obeid.

"There will be no negotiation today with the Transitional Military Council as our negotiating team is still in El-Obeid and will return only tonight," said Satea al-Haj.

Meanwhile, thousands of students - heeding a call for nationwide protests against the El-Obeid "massacre" by the Sudanese Professionals Association (SPA) - rallied in Khartoum and other cities to condemn the violence against their fellow students.

The SPA, which spearheaded the protests against al-Bashir, also called on all schools in North Kordofan state to suspend classes.