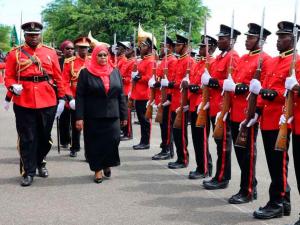 Tanzanian President Samia Suluhu Hassan inspects a guard of honour by the Tanzania Peoples’ Defence Forces shortly after being sworn in on March 19, 2021 at Ikulu in Dar es salaam. PHOTO | PSU

In an indication that there could have been some behind-the-scenes power jostling in the run-up to the announcement of the late president John Magufuli’s death, and seeking to reassure the country, newly sworn-in President Samia Suluhu Hassan praised the country’s military, saying they followed the law.

In her first public address to the nation from State House shortly after taking the oath of office on Friday, President Suluhu said that she was satisfied with the country’s defence forces “whose foundation was built by our forefathers”.

In the announcement of the death of Magufuli, she said he had died at the Mzena hospital in Dar es Salaam. The hospital is run by the Tanzania Intelligence and Security Services.

“This is a time to bury our differences and unite as one. This is not the time to look into the future with doubts, but with hope and confidence,” President Suluhu said.

“Nothing will go wrong. We have followed every step provided for in our Constitution on what to do whenever something like this happens.”

“I appeal to you dear Tanzanians to remain calm and united during this difficult time. I can assure you that we are strong as a nation and we, your leaders, have an elaborate plan to continue from where our colleague stopped.”

She also vowed to defend the legacy of her predecessor, whom she referred to as a patriot, suggesting she would maintain the government policy.

President Suluhu, who had been Magufuli’s vice president from 2015, said she will lead the country using lessons from him.

“I learnt a lot from him,” she said, pledging to serve all equally according to the law.

“Today is not a very good day to address the nation, because I am overwhelmed by a big wound in my heart. The oath I have taken today, as opposed to all oaths of office I have ever taken in my life, is the highest in our land. But it comes with sadness and a country full of sorrow. I can say without a doubt that we have lost a bold leader who had a vision. He was a patriot who loved his country and the African continent,” she told the nation from Ikulu, Dar es Salaam.

President Suluhu, a Zanzibari Muslim, is the first woman head of state of Tanzania.

She had deputised Magufuli since 2015 when they won the presidency on the Chama cha Mapinduzi ticket. The country’s constitution states that the vice president takes over for the remainder of the term if the president dies in office, or is incapacitated in any way and cannot fulfil his duty. President Suluhu will be eligible to contest one more term for the presidency.

Born on January 27, 1960, Suluhu becomes the first person born on the Zanzibar archipelago to become president of the country. Ali Hassan Mwinyi, who was president in 1985-1995, was born on the mainland.

President Suluhu had said in previous interviews that her father was a teacher, and that her school grades were not good enough to take her to the best colleges.

She first went to parliament in 2000, after CCM nominated her in the Zanzibar House of Representatives, where she served as minister for youth and later tourism.

In 2010, she joined the National Assembly of Tanzania and served in Jakaya Kikwete’s government as minister in charge of Union Affairs. She undertook postgraduate studies in Tanzania, the UK and the US.

Generally perceived as soft-spoken, President Suluhu said she had learnt a lot from her bold who rattled critics at home and was not afraid to pursue Tanzania-first policies to protect national interests.

Under Magufuli, the country defied global guidelines on Covid-19 and did not impose a lockdown. He had declared Covid-19 defeated in June 2020, and the country stopped giving daily data on infection rates.

Magufuli also rattled donors and Tanzania’s economic partners for imposing what he called enslaving clauses, and rewrote the mining law so that Tanzania and not multinationals would benefit the most from the country’s natural wealth.