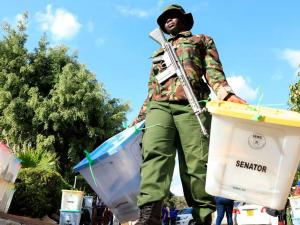 The Supreme Court of Kenya has ordered the inspection, scrutiny and recount of votes in 15 polling stations as requested by the Azimio la Umoja – One Kenya Coalition party in its petition.

The court ruled that the recount and the inspection of other Independent Electoral and Boundaries Commission (IEBC) materials should be carried out within 48 hours. The exercise started at 2pm on Tuesday.

Inspection will also be carried out in ballot boxes from Jarok, Gathanji and Kiheo primary school polling stations in Nyandarua County.
Malala concedes defeat, lauds IEBC for free and fair election
This comes as the court starts hearing the petition challenging Dr William Ruto’s election victory in the just concluded polls. The court held its Pre-Trial on Tuesday and will continue up to September 5, where a final verdict will be issued.

During the Pre-trial hearing, Chief Justice Martha Koome said that the court has identified nine issues from the petition for determination, which will be considered by the parties.
The issues for consideration are:

1. Whether the technology deployed by the IEBC for the conduct of the 2022 general elections met the standards of integrity, verifiability, security and
transparency to guarantee accurate and verifiable results.

2. Whether there was interference with the uploading and transmission of Forms 34A from the polling stations to the IEBC public portal.

3. Whether there was a difference between Forms 34A uploaded on the IEBC public portal and the Forms 34A received at the national tallying
centre, and Forms 34A issued to the agents at the polling stations.

4. Whether the postponement of Gubernatorial Elections in Kakamega and Mombasa Counties, Parliamentary elections in Kitui Rural, Kacheliba
Rongai and Pokot South Constituencies and electoral wards in Nyaki West in North Imenti Constituency and Kwa Njenga in Embakasi South
Constituency resulted in voter suppression to the detriment of the Petitioners in Petition No. E005 of 2022.

5. Whether there were unexplainable discrepancies between the votes cast for presidential candidates and other elective positions.

6. Whether the IEBC carried out the verification, tallying, and declaration of results in accordance with Article 138 (3) (c) and 138 (10) of the
Constitution.

7. Whether the declared President-elect attained 50%+1 vote of all the votes cast in accordance with Article 138 (4) of the Constitution.

8. Whether there were irregularities and illegalities of such magnitude as to affect the final result of the Presidential Election.

9. What reliefs and orders can the Court grant/issue?
https://nairobinews.nation.africa/supreme-court-orders-recount-of-votes-...