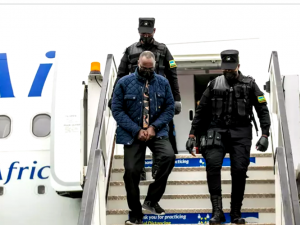 enocide suspect Jean-Paul Micomyiza, 49, finally arrived in Kigali, Rwanda early Wednesday, April 27, after being extradited by the Kingdom of Sweden.

Survivors of the 1994 Genocide against the Tutsi welcome the “strong signal from the Swedish authorities” and continue to appeal that other countries hosting such criminals stop endorsing impunity.

Naphtal Ahishakiye, the Executive Secretary of Ibuka, the umbrella association of Genocide survivors, told The New Times that: “We welcome the Swedish judicial authorities’ decision to extradite this genocide suspect to Rwanda where he committed the crimes.”

“Advocacy was done, and it continues to be done, but many other countries continue to drag their feet when it comes to bringing these criminals to book. Sweden and a few other countries have set a good example and our appeal is that those others should follow it and do the right thing. Impunity, especially for the crime of genocide, should not be accepted.”

Micomyiza is accused of: committing Genocide by killing members of the Tutsi ethnic group, complicity in Genocide and crimes against humanity (rape).

He was indicted by the National Public Prosecution Authority (NPPA) in 2020 for his role in the 1994 Genocide against the Tutsi.

The NPPA spokesperson, Faustin Nkusi, issued a statement commending Swedish judicial authorities for the “extradition of the genocide fugitive, continued cooperation and mutual legal assistance, as well as contribution to the global effort to fight impunity.”

The government of Sweden earlier this month gave the green light to his extradition to Rwanda. This came three months after a top Swedish Court on December 21, 2021, found no reason why the Rwandan arrested in the Nordic country in 2020 could not be extradited to Kigali where he is wanted for crimes he allegedly committed during the 1994 Genocide.

In December 2021, the Supreme Court in Sweden saw no legal obstacle to extradite Micomyiza.

Before his arrest, the suspect lived in Gothenburg, a major city in Sweden situated off the Göta Älv River on the country's west coast, for 15 years. Micomyiza applied, but was denied citizenship in Sweden because he is politically active.

During the Genocide committed against Tutsi in 1994, Micomyiza was a second year student at the then National University of Rwanda, in the Faculty of Applied Sciences. As a university student, he was also a member of a committee called Comité de Crise that was instrumental in committing the Genocide. The mission of the Comité de Crise was to search and identify Tutsi civilians to be killed.

According to sources, evidence gathered during investigations shows the participation of the suspect in crimes committed in Ngoma Commune, in former Butare Préfecture (Currently in Huye District, in the Southern Province), at the University campus and its surroundings.

At the gates of his family’s home, Ahishakiye said, Micomyiza set up a roadblock where many Tutsis were identified and executed.

Strong signal from the Swedish authorities

From Stockholm, Josine Kanamugire, the president of Ibuka-Sweden, said: “Ibuka-Sweden wishes to express gratitude to the Swedish judicial authorities for the extradition of the genocide fugitive and for recognising that genocide is a crime punishable by law here.

“Our thoughts are with the genocide survivors that are reliving the atrocities he caused them 28 years ago!”

Etienne Nsanzimana, the president of Ibuka-France, said: "For Ibuka France and Ibuka Europe, which works for memory, justice and support for genocide survivors, such an arrest is seen as a strong signal from the Swedish authorities.”

“It is a hope that other countries will be able to extradite the perpetrators of the genocide so that they can be judged in the place where they committed the crimes, and that the passage of time will not erase or dilute their culpability."

Sweden is home to other Genocide suspects including Théodore Rukeratabaro who was, in mid-2018, given a life sentence there for his role in the 1994 Genocide. Rukeratabaro fled to Sweden in 1998. To avoid capture, he altered his name to Tabaro.

Apart from Rukeratabaro, on February 15, 2017, the Svea Court of Appeal in Stockholm, upheld the life sentence imposed on Claver Berinkindi, a Rwandan who acquired Swedish citizenship in 2012. Berinkindi was found guilty of Genocide, a crime he committed in the former Prefecture of Butare.

Another is Stanislas Mbanenande who was handed a life sentence on June 20, 2013.