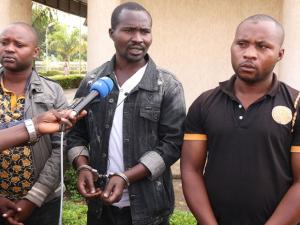 Rwanda National Police (RNP) has arrested three men, who were masquerading as one of their own and defrauding people.

Daniel Ndagijimana, who has been guising as ‘Chief Inspector of Police Yves Babu’, Christian Ngirimana and Mussa Ndagijimana were paraded to the media on Monday at Remera metropolitan.

Daniel Ndagijimana is said to be the ringleader, having recruited Ngirimana, Mussa and another accomplice still at large, into the scam.

At least eight people have since come forward claiming to have been defrauded by the trio.

“Between August and December this year, Police received complaints from several people, who were defrauded with promises of giving them drivers licence, and the name CIP Yves Babu was a common denominator in all the complaints,” CP Kabera said.

“During investigations, Police managed to apprehend Daniel Ndagijimana, who was impersonating CIP Yves Babu; Ndagijimana provided names of other members of his group including Christian Ngirimana and Mussa Ndagijimana, who were also located and arrested,” he added.

How they scammed people

Daniel Ndagijimana, who admitted to the crime, said that he started this scam in February this year, when he also recruited his accomplices.

“We would go to different sites where driver’s license tests are done, get names of the targets and seek their help with a phone to make an urgent call and in the process you make a flash call on own line so as to get contacts of your target,” Ndagijimana explained.

He further narrated that with particulars and contacts, they would call their targets posing as Police officers informing them that they had failed the tests but request for money so as to help them get the permit.

“I chose to guise as CIP Yves Babu because on most sites where we went, he would be there supervising the driving licence tests, which would sound real in the ears of our targets,” Ndagijimana said.

According to Ndagijimana, he got help from Mussa to acquire CIP Yves Babu’s SIM-card, which is one of the SIM-cards they were using to defraud different people.

According to Ndagijimana, most of their victims were targeted in Gasabo, Nyagatare, Bugesera, Gicumbi and Huye districts. At least Rwf800, 000 was conned from five people in Gasabo and Gicumbi districts, he said.

One of the victims from Nduba in Gasabo, who requested not to be named, told the media that Ndagijimana, who called her back in June guising as ‘Calixte Twagiramungu’, defrauded her of Rwf300,000.

“I first sent him Rwf250, 000 on Mobile Money and Rwf50, 000 later when he sent me a message that my driver’s license was ready for pick-up and requested to be refunded the money he used to declare it. I got to know that I was conned when the same message was sent to many other people, some of them my friends,” she said.

Another victim identified as Jean de la Croix Mushimiyimana also said that he was defrauded of Rwf95,000 and his two other friends conned of combined Rwf250,000.

Mushimiyimana said he sold his calf so as to raise the money, which has since brought conflicts with his wife.

“Many people have been scammed through different tricks. We remind the public that the whole process of acquiring a driver’s licence is done individually… anyone telling you that he will help you, either calling themselves Police officers, are trying to defraud you and should be reported on 997 (Anti-corruption toll-free line) or other known Police communication channels,” CP Kabera said.

He added: “These are criminals tarnishing the image of the Police; be it a Police officer or any another member of the public, we appeal to Rwandans to report them whenever they see or suspect them to be engaged in criminal activities.”

Fraud, deception, obtaining another person’s property by use of false names or qualifications is punishable with an imprisonment term of two to three years and a fine of between Rwf3 million and Rwf5 million, as stipulated under article 174 of the penal code.