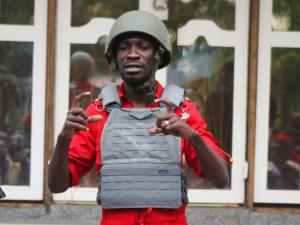 “There is no one above the law. There is a need to know that Mr Kyagulanyi is a presidential candidate so if these people come and pull him out of the radio, he is free to sue them so that the long hand of the law catches up with the perpetrators,” Justice Byabakama told the media yesterday after a meeting with  Mr Kyagulanyi and his team who had come to petition EC over the behaviour of security agents.

During the four-hour meeting, Mr Kyagulanyi presented his complaints about the difficulties they have been facing on their campaign trail.

According to sources who attended the meeting, Bobi Wine wanted EC to make a formal statement about the recent killings of people during protests in Kampala and other towns.

He also wanted answers over the blocked campaigns and radio talk shows.

Sources said: “Bobi Wine wanted an extension on his campaign trail citing the lost time in police custody and also asked EC to withdraw the army from campaign activities and prevail over police high-handedness.”

Bobi Wine also presented to EC more than 12 pictures from his field experience.  His team members also narrated their ordeals.

The sources said Justice Byabakama’s indicated that the EC has no control over security forces, but advised them to seek redress in court.

“This position was reiterated by Commissioner Tashobya who attended the meeting on zoom,” said a source.

Asked whether violence and obstruction were at the centre of the discussion with Mr Kyagulanyi, Justice Byabakama answered in the affirmative but dismissed the claim that the EC has lost control of the electoral process.

“If we were not in charge of the campaigns, why are you here? Why did Mr Kyagulanyi come here if we were not in charge? What we always emphasise is the fact that there are many stakeholders, whose guidelines must be followed, especially in regard to the standard operating procedures,” Justice Byabakama said.

The source said Justice Byabakama assured Bobi Wine that he would call for a meeting with the security, especially police leadership to talk about the issues of brutality. The source also said Mr Byabakama remained silent on the issue of the army interfering with elections.

“When we complained about these things Justice Byabakama told me he was not on social media and he doesn’t watch the news even when I was abducted in front of his officials at the nomination centre. That is why I have come in person so that I seek answers to all these problems,” Bobi Wine said yesterday.

Mr Apollo Kantinti, the former Kyadondo East MP, said the things that are happening are a reflection of what has happened before and what could potentially happen in the coming elections.

“I am glad Mr Kyagulanyi has taken a step to come and seek redress to these issues. When EC answers them, they will work for everyone because we are equally sharing the same bread as people in the Opposition. That is a reflection of the fact that there is no democracy,” Mr Kantinti said.

Referring to his letter written to the police last week over blocking the presidential candidate’s campaigns, Justice Byabakama also said they are already handling some of the issues.

“We don’t put all our things in the media but I reminded Mr Kyagulanyi that when they had failed to access the venue in Mbarara at the launch of their manifesto, I called the responsible people and they handled the things,” he said.