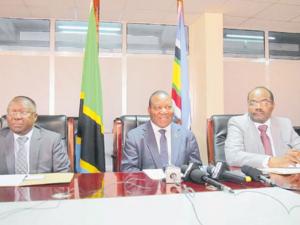 The government yesterday clarified that it’s 8,000 thousand teachers who were employed and not 13,000 as announced earlier.

On Friday, the permanent secretary in the President’s Office responsible for Regional Administration and Local Government (PO-RALG), Mr Joseph Nyamuhanga, released the list of the newly recruited teachers saying a total of 13,000 were employed.

However, the list had actually 8,000 names, rising questions over the missing others.

The list shown that a person who completed Form Four last year had been recruited as a primary school teacher in Ruvuma Region, sparking question on when he went through college.

However, yesterday in a press conference, three permanent secretaries from the dockets linked with education made a clarification, terming some of the challenges that were encountered as the system itself that users were unable to edit the content.

The permanent secretary in the President’s Office (Public Service Management), Dr Laurean Ndumbaro, said the government had recruited 8,000 teachers and the remaining 5,000 will be engaged before June 30, 2021.

The officer informed that, queries arose were mainly caused by the candidates themselves of whom, according to him, failed to fill their form four and high school index numbers correctly, a state that resulted into complications, to some.

“The system is automated, that is to say when a person fills in his or her particulars, they must go in an ascending order accurately. We do these to avoid fraud and other iniquities,” he said.

He added that the essence of providing the posts was mainly to eliminate salary arrears and also the system had a rate of employing staff in a month or within a stipulated duration.

Meanwhile, the permanent secretary in the office of the President, regional administration and local government, Mr Joseph Nyamhanga, pointed system errors and that it caused some names to reoccur naming Abdallah Shonde whose name appeared 196 times. He rather informed that this was the first time they had engaged the system directly in recruiting as in the past they were forced to intervene in certain areas where challenges arose.

He cited the example of some applicants who appeared to have completed Form four in 2019 but despite identifying the shortcomings, were unable to edit their particulars until when the Tamisemi tracked their information. On the other hand, the Education permanent secretary, Dr Leonard Akwilapo, spoke of the seriousness that the government had put in place to track down teachers who lied in teaching courses in order to land jobs.

He said a teacher’s norm is to teach two subjects but there are some who had applied to teach specific subjects that are not compatible,

“Our system will have a place to fill indicating the two subjects applied for and this will eliminate all unanimities,” he said.