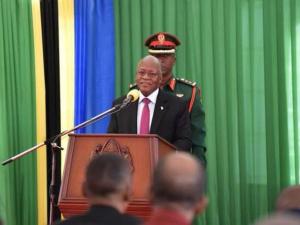 President John Magufuli on Wednesday, December 9, 2020 changed the punishment of 256 inmates sentenced to death into life imprisonment as Tanzania celebrated the Independence Day.

The president also pardoned 3,316 prisoners who had been sentenced over different offences and had spent most of their sentences.

The 256 convicts were in several prisons countrywide waiting for execution of their sentences following court decisions.

President Magufuli was speaking after swearing in 21 ministers and 22 deputy ministers appointed on December 5, this year, the event that went concurrently with the commemoration of 59th anniversary of the Tanganyika independence.

Speaking during the event, Dr Magufuli said no Tanzanian had been hanged since his administration assumed office in 2015 and that he was using powers conferred on him to change sentences issued on them.

“I’m reducing sentences issued to the 256 prisoners from death sentence into life imprisonment,” he said.

“Some of them have been given death sentence probably for murder of one, two or even three people. But, the law requires me to hang all the 256. Who will be the most sinful between those who have killed one, two or three people and I who is required to kill 256?”

The Head of State said he had failed to instruct execution of the judgment and sought forgiveness from the public.

“I will be the most sinful of all, deserving to be hanged directly before being taken to the court when compared to those who killed one, two or three people. Therefore, I have failed to do so,” he emphasized.

He instructed the ministry of Home Affairs to follow the law and change jail terms of the 256 convicts to life imprisonment, instructing that they prisoners should now actively participate in production activities.

“Probably, my successor will execute the judgment, but I have hesitated,” he said.

During the event, the Head of State also has accepted proposals from the Prisons Department to reduce jail terms to some prisoners and pardons others amounting to a total of 3,316 mostly those sentenced after committing small offences and those who have served most part of their judgements.