Tanzania, Kenya face off over maize amid shortage, soaring prices 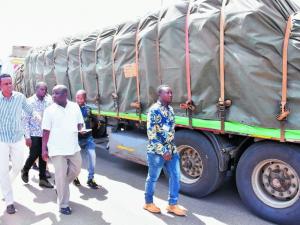 Kenya has blocked dozens of trucks ferrying maize from Tanzania over quality concerns even as the country grapples with dwindling stocks and skyrocketing prices of the commodity.
The maize shortage in the country has seen flour prices rise from $1.40 to about $2 for a two-kilogramme packet within a week, as millers slashed production by half.
But at the Namanga, Holili and Lunga Lunga border crossings with Tanzania, the dispute on the quality of the grain has maize-laden trucks in the queue, awaiting clearance into Kenya.

According to Kenyan government officials, the Tanzanian exporters lack phytosanitary certificates, hence the quality and safety of the commodity cannot be ascertained. But Tanzanian Agriculture Minister Hussein Bashe dismissed the claims terming them insincere and unjust, saying Tanzania supplies quality grain, “even to the World Food Programme.”

Region starves as Tanzania seeks wider market for its surplus food
Kenya, in a note to border crossing managers, has called for fidelity to the International Plant Protection Convention (IPPC) and the World Trade Organisation agreement on sanitary and phytosanitary regulations.

Tanzania called this an act of trade sabotage.
In the IPPC, a member has to get an import permit detailing phytosanitary requirements from the importing country before exporting. All phytosanitary measures are based on international standards as in plant protection services to ensure that foreign injurious pests, diseases and noxious weeds are not introduced or spread into the country.

Undermining a number
Mr Bashe accused Nairobi of undermining a number of bilateral trade agreements and the EAC Market Protocol, leading to standoff at the border crossings.
“Kenya has been importing food products such as maize, avocado and others for which Tanzania has been acquiring special export certificates according to IPPC, but we are shocked by how Kenya is treating our products, causing them to get stuck at the border,” the minister said at Namanga crossing this week.

Tanzania maize exports to Kenya surge sixfold after Samia's visit
“We suspect what Kenya is doing is exactly what their middlemen did sometime last year to expose our product to harsh weather to lower its quality to render it to fetch low prices but we have orders from President Samia Hassan to protect the interests of Tanzania’s farmers. We shall not jeopardise that until we receive a non-compliance notice from the Kenyan government, which we suspect is acting unprofessionally but we shall follow all procedures to resolve the issue to allow free flow of maize to Kenya,” said the minister.

Milling cost
Mr Bashe, however, later changed tune, explaining that some traders were loading lorries with maize without filling out export licence forms online and were at the border awaiting licensing.
“There are at least 40 trucks at Namanga without export licences. I want to caution traders thus, ‘don’t leave without a licence’,” he said. “Export licences are online, get them and go on and trade. But don’t try to recycle the certificates for subsequent exports.”
He said it helps to track the trade and products and safeguard against accusations of poor quality products.
He cited a few unscrupulous traders smuggling goods across the borders and warned that stern action would be taken against them.

Kitui Flour Mills in Mombasa has already cut its operations after running out of maize. “We usually require 950 tonnes of maize to operate fully but currently we have cut our operations by a half since we have about 550 tonnes, which will be depleted in a day,” Anwar Ahmed, an official at the miller, told The EastAfrican Thursday.

Johnson Weru, Kenya’s Principal Secretary in the Ministry of Industrialisation, Trade and Enterprises Development says Kenya and Tanzania government officials plan to meet in July to discuss the emerging non-tariff barriers at the Namanga, Horohoro, Holili, and Lunga Lunga, border crossings as these threaten to derail the gains made in intra-EAC trade.
https://www.thecitizen.co.tz/tanzania/news/business/tanzania-kenya-face-...