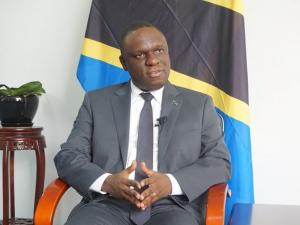 Dar es Salaam. Tanzania over the weekend announced that it will in October open a new consulate in Guangzhou China to support the foreign mission which currently operates from Beijing.

This was said by Ambassador Mbelwa Kairuki on Sunday in a briefing saying the Consulate General will be a first port of call for businesses from several parts of China.

"I am delighted to inform you that the Government of Tanzania will open a Consulate General in the City of Guangzhou next month. It will be the first port of call to enterprises from Guangzhou, Shenzen, Foshan, Huizhou, Jiangmen, Shunde, Taishan, Zhongshan, and Zhuhai" he wrote on the embassy’s twitter handle.

This provides opportunity to businessmen and Women who would like to trade between China and Tanzania.

the decision according to some businessmen was one that they think was long overdue and it will save them the long distances they often had to travel to Beijing.

He was speaking at the 17th China International Small and Medium Enterprise Fair in Guangzhou.

"Industrialization is one of the priority agendas of the Government of Tanzania, and it is also a priority in our Strategic Cooperation with China"

He added: It is imperative to highlight the SME's contribution to China-Africa Economic Cooperation.We should also highlight new circumstances that provide opportunities to China and Africa's SMEs.