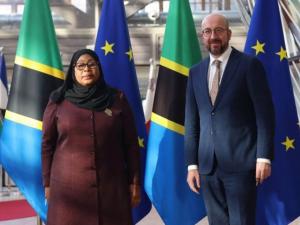 Tanzanian President Samia Suluhu Hassan has drummed up support for neighbouring Burundi by calling upon the European Union to lift economic sanctions imposed on the country six years ago.

The Tanzanian leader in Brussels, Belgium, where she held talks with the President of the European Council, Charles Michel, said a stable Burundi is good for the region.

“I call upon the EU to continue supporting the Burundi government. The EU has a major role to play in the neighbouring country’s stability and development,” said President Suluhu.

“A stable Burundi is good for the Great Lakes Region, good for the EU and good for the world,” she added in a statement released by her spokesperson Zuhura Yunus.

On Tuesday, the EU announced that it would lift sanctions imposed on Burundi in 2016, during president Pierre Nkurunziza’s tenure, following violent repression in the country orchestrated by the government since 2015.

In 2020, Burundi witnessed its first democratic transition from the late president Nkurunziza to the incumbent Evariste Ndayishimiye.
Last February, the EU and the Burundian government resumed talks to normalise relations that had since deteriorated.

East African Community leaders have been pleading with the EU to lift the economic sanctions, which have adversely affected the Burundian economy pushing over 65 percent of its 11.9 million population below the poverty line. Further, regional and international trade has been at its lowest.

The EU is a significant donor to Burundi, and its decision to freeze 432 million euros ($514 million) of funding has left the country’s economy in the doldrums.

The US lifted its economic sanctions against the Burundian government a month ago.