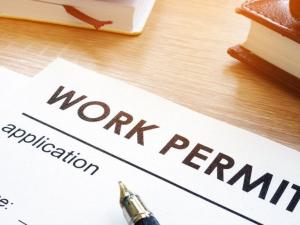 Dar es Salaam. The government has simplified issuance of work permit for foreigners with an online system which it said has cut the waiting days from 33 to less than a week.
The commissioner of Labour in the Prime Minister’ Office, Mr Francis Mbindi, said yesterday when briefing journalists here where he explained that the electronic process started April 23, this year.
He said initially when the process was manual the legal requirement was 14 days, but due to a number of challenges, the Labour department would take up to 33 days to complete validation and issuance of the permits.
“We used to take a lot of time to process a working permit because we were understaffed, and had to scan the request, analyse the letters while at the same time the process was expensive, we had to procure papers and ink for the process which was very cumbersome,” he said.
However he noted that since the process was digitised, they take one day if all the necessary requirements are completed and incase of any challenges could go up to seven days to complete the process of issuing a permit.
Recently, President Samia Suluhun Hassan was quoted saying she was taking her agenda of improving Tanzania’s business environment further with a raft of changes to the laws governing the conduct and registration of businesses.
The government is advancing a raft of changes to the Companies Act Cap 212 and the Non-Citizens (Employment Regulation) Act. Cap 346 in the ongoing parliamentary sessions through the Written Laws (Miscellaneous Amendments) (N0. 2) and (NO.4) ACT, 2021.
In view of this in another development, he said that Parliament had amended the bill section 12 of the Act to extend the time limit for applicants willing to work in Tanzania from the current five years to eight years,” reads the document.
Adding: “Applications have to be done on renewal basis after every 24 months.”
The bill says that proposed amendment also aims to empower the Labour Commissioner to attach conditions to work permits with finality effect depending on circumstances such as applicant’s visit to stay in the country for a specific period of time.
Proposed amendments also extend the immigrant quota from the current five employees to 10 employees who shall be allowed to stay and work in Tanzania during the whole period of investment.
“Moreover an investor employing 10 local employees shall be entitled to employ one non-citizen employee,” reads the bill in part.
According to the bill, Section 22 of the Act is amended to enable the minister to formulate regulations that would standardise the work permits issuance processes as incentives to investors.
He said the decision was reached to enable the experts to have adequate time to transfer their expertise to locals and at the same time allow them to stay in the country.