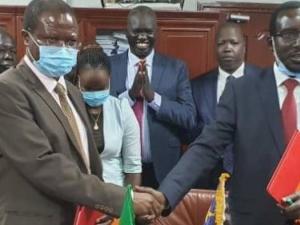 Addressing the media in Juba on Tuesday morning after signing his contract, Dr. Patrick Mugoya said he will develop a strategic plan that will enable the transparent and accountable collection of non-oil revenues.

“As you just witnessed, we have just concluded the signing of my contract as the new Commissioner General of the National Revenue Authority. I am supposed to hit the ground running. Three things: First, we will fully operationalise the National Revenue Authority. We will immediately take measures to make sure that the NRA is fully operational,” Dr. Mugoya said.

“That is the first thing. Secondly, we will ensure the NRA formulates or develops in a participatory manner with all key stakeholders a strategic plan for the Authority that will see to it that non-oil revenue mobilization is enhanced in a transparent, efficient effective, and accountable manner.”

Dr. Mugoya said that as all this is being done, they will make sure that revenue collection is not disrupted, “We will put into place all these measures while at the same time sealing loopholes and revenue leakages in terms of tax evasions, unscrupulous exemptions, tax avoidance, smuggling and the like, as immediate measures.”

The new Commissioner General was formerly the deputy commissioner of the Tanzania Revenue Authority.

In September, the National Revenue Authority informed the parliament that the country has lost almost forty billion South Sudanese Pounds in the last three months alone.

It attributed the loss to tax waivers between June and August 2020.