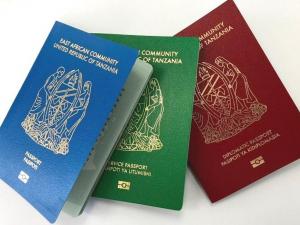 Dar es Salaam. The Tanzanian passport has ranked 77 among the world's most powerful passports, according to the latest report which assesses the influence of global travel documents.
According to research conducted by Henley site, the Tanzanian passport grants a holder access to 72 countries globally without the requirement of paying for a visa.

On the list, Tanzania is tied with Kenya on the 77 slot, with both countries having a national passport which allows a holder to gain access to 72 countries without a visa on entry.

The two East African nations are ahead of their neighbours, with Uganda coming in third at number 81 with a passport that allows its holder to enter into 67 territories visa-free. Rwanda is 87 with holders of its passport gaining entry into 61 countries without a visa, while Burundi is placed 97 with 51 countries globally accepting holders of its passport to enter without visa payment. Zambia is ranked 78, a slot behind Tanzania with access to 71 countries without a visa. While the DRC is 106 with access to 42 countries.
Taking top spot is Japan, whose passport allows a holder to enter 192 countries around the world without the need for visa payment.
Tanzania's 2021 performance has improved from the last time it was ranked back in 2018 where the national passport could only enter 67 countries worldwide without the need to pay for a visa.