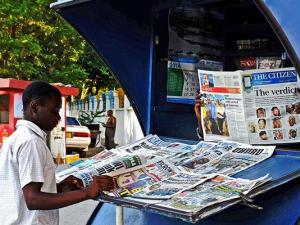 Tanzania’s government spokesman has issued a warning to local journalists about quoting foreign organisations and representatives in their reporting.

The warning comes a few hours after American and British diplomats released a statement criticising the process of the just-ended local elections in the country.

The US and UK embassies said the elections were marred with irregularities and questioned the results.

The ruling party won 99.9 per cent of the seats contested in the elections, which all major opposition parties boycotted saying there had been intimidation and government interference in the registration process.

In a thread of three tweets in Swahili, government spokesman Hassan Abbas said some foreign organisations and representatives were using the media to spread rumours and propaganda.

He said that local media and foreign media companies registered in the country were party to misinformation by quoting foreign sources.

“For this matter, the government has done enough explaining, given enough warnings and enough pardons. Now we will take stern legal measures,” Mr Abbas said in one of the tweets

This warning comes few days after Amnesty International and Human Rights Watch accused the government of stifling media freedom in the country.

They cited cases of media companies being shut down and journalists being intimidated.