Tanzania's budget put under the microscope 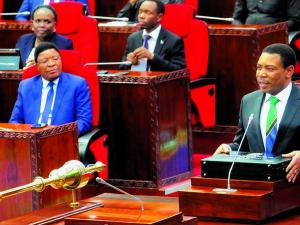 Dar es Salaam. The 2022/23 Budget, which was presented in Parliament on Tuesday, could potentially stimulate local production and effectively contain the spiralling cost of living, analysts said yesterday.

They noted, however, that the Sh41.48 trillion revenue and expenditure plan also contained a number of provisions that could derail growth in some economic sectors.
The plan to stimulate agricultural production, as part of efforts to raise agricultural exports to $5 billion by 2030 from the current $1.2 billion and boost horticultural sales to $2 billion from the current $750 million by significantly expanding irrigation, could work to the country’s advantage if smartly implemented, they said.

Similarly, the government’s continued investment in power generation (including the Julius Nyerere Hydropower Project), water and transport (including the standard gauge railway, road and bridges) drew praise from a cross-section of analysts who spoke to The Citizen yesterday. Analysts were equally supportive of measures that are meant to cut the cost of living, reduce unnecessary government spending, and attract more investment to drive economic growth and job creation.

However, the abolition of the VAT waiver on smartphones and air charter services as well as the planned introduction of an income tax of Sh3.5 million on each lorry and bus per year were some of the proposals that could derail growth of a number of sectors, they said.

The decision to reinstate value added tax (VAT) on smartphones and tablets has set alarm bells ringing among dealers and consumers.
Mr Kelvin Twissa, a marketing, e-commerce and fintech expert, said abolition of the VAT waiver on smartphones and tablets was a big loss to consumers.
“One year isn’t enough to see tangible benefits. Most Tanzanians still use 3G, and the exemption was aimed at stimulating digital growth and inclusiveness. Consumers will now get punished for buying high-end devices,” he said.

Mr Rahim Hassan, a science technology expert, said the only way one could know whether VAT exemption worked was to get an importer of the devices to elaborate the difference between prices in the source market and market prices in Tanzania.
A technology executive and telecom and banking expert, Mr Jones Mrusha, said there was a need to get data from authorised dealers in such brands as Samsung, Oppo and Tecno, which will show the actual price difference on a wider scale.

Mr Emmanuel Mwakitwange, an accounting, taxation, finance and technology expert, questioned how the government tracks the changes. “Many sellers do not issue receipts, so how are these exemptions monitored? In order for us to know impact of VAT we need to know how well it was tracked and recorded. Some do not record at all, so there’s some data that is not tracked,” he said.

Mr Twissa queried how the government established the efficacy of VAT when either waiving or reinstating it.
“A proper and formal channel of receipts might help, but we need to assess the books to see past performance and know and highlight the things that had an impact,” he added.
For his part, Mr Mrusha said in order to reach a wide range of consumers, there should be access to point of sales (POS) equipment.
“This will provide data monitoring on new device entries and distributors,” he said.

Affect businesses
In his speech, Finance and Planning minister Mwigulu Nchemba proposed to reinstate powers to the Minister for Finance (which were repealed through the Tax Administration Act, 2015) to make regulations for the better carrying out of the objects of the principal legislation, including regulations to prescribe eligibility, duration and procedure for remission of interest and penalties (“Regulations for remission”). Through the Finance Act 2021, the powers were removed from the Finance Minister.

However, PwC says the decision could potentially result in unnecessary bureaucracy.
“Based on experience, when the remission power was previously with the Minister, it was very difficult to administer compared to when the powers remain with the CG of the TRA who has better visibility of a taxpayer’s affairs. The proposed amendment will make the process of remission more bureaucratic and time consuming,” PwC says in its National Budget Bulletin 2022/23.

Achievable
PwC, however, commends the government for trying to come up with a commitment to leverage information and communication technology (ICT) systems in tax administration (including electronic filing and payment), and to trying to register all persons over 18 with the National Identification Authority as a way of expanding the tax base.

Coupled with some effective expenditure management plans, including tighter controls on expenditure on vehicles, travel, meetings as well as with a more robust procurement and audit discipline, PwC believes the planned Sh28 trillion of domestically-mobilised budget funds for the coming financial year could be achieved.
“Against this background the 2022/23 domestic revenue target of Sh28 trillion – out of which tax revenue is Sh23.6 trillion - representing a 15 percent increase on the likely 2021/22 outturn, seems quite achievable,” PwC says.

PwC has also recognised the various tax measures included those that seek to address cost of living challenges, support domestic manufacturers, reduce costs for the agricultural sector and also widen the tax base.
“On cost of living, reference was made to the continued provision of fuel subsidies, as well as other measures related to the fuel supply chain. For domestic manufacturers a number of supportive measures were announced in terms of customs duty (both in terms of duty on finished goods and relief on raw materials), as well as no increase in specific excise duty rates on production,” PwC says.

The Tanzania Association of Oil Marketing Companies (Taomac) has praised the government for establishing the Fuel Price Stabilisation Fund (PSF), providing fuel subsidies, and allowing suppliers who are capable of importing fuel at affordable prices to do so
Taomac executive director Raphael Mgaya termed the 2022/23 Budget as a realistic revenue and expenditure plan that would bring good results, and deliver benefits to the final consumer.

“We are happy that the government has established the PSF. To us this is a good idea because the established fund will help regulate the cost of fuel that has frequently hit the country due to hikes in global price,” he said.
The PSF is used during times of a rise in prices for compensating revenue loss by cross subsidizing funds saved from times of affordable prices without hurting the consumer.

Mr Mgaya said for prices to remain within affordable levels, the government – which released Sh100 billion to compensate for fuel prices this month (June) – would have to maintain the tempo and release much more for July prices.
“If the government releases only about Sh100 billion next month (July), fuel prices will go up because they have risen in the world market,” he cautioned.

Aviation players said the proposal to impose VAT on air charter services would see them transfer the burden to travellers.
Tanzania Air Operators Association (Taoa) executive secretary Lathifa Sykes told The Citizen that the proposal contradicted the implementation of the government’s wider goal of boosting tourism.

This in turn, she added, would counter what the country had been trying to achieve in line with increasing the annual number of tourists from 1.4 million recorded last year to 5 million by 2025.
“It is distressing,” she said, adding that in October last year, they presented their recommendations to responsible ministries, but no single issue has been worked on.
Some of the measures that they had recommended included exemption of 18 percent VAT on leased aircraft, aircraft parts, aircraft engines and maintenance on domestic transactions.

On top of that, aviation stakeholders were expecting the review of unfriendly policies that subject subsidiary companies to the payment of Capital Gain Tax (CGT) in case there is change in the ownership of the holding company.
An aviation expert with 30 years’ of experience, Mr Juma Fimbo, said following the abolishment of exemption on air charter services, it was passengers who would suffer.

However, considering the increasing public demand for various services, the government was on the right track to charge VAT on the given service as a way of broadening its tax base.
“The government, for-instance, needs money so that it could stand a chance to subsidise fuel that touches the majority of Tanzanians,” said Mr Fimbo.
He suggested that the government should broaden its tax base for it to have more in its basket.

But while the aviation players were complaining, the situation was different to their counterparts in the tourism sector who are happy with the government’s proposal to amend the Insurance Act CAP, 394 to expand the scope for mandatory insurance to include public markets, commercial buildings, imported goods, marine vessels, ferries and pontoons.

The measure is intended to enhance financial inclusion and increase insurance uptake.
According to the Tanzania Insurance Regulatory Authority (Tira), currently there is no provision of the law that requires public building owners or facilities that attract lots of people such as football ground or markets to pay compensation to people who have been injured as a result of a disaster that may occur within those buildings.
“This is why we commend the government for accepting and implementing this recommendation which we believe will increase insurance penetration,” said the Insurance Commissioner, Dr Baghayo Saqware.

He said the proposal would raise citizens’ risk protection level in line with the Financial Development Master Plan (FDMP) which seeks to ensure that up to 50 percent of adults are insured by the year 2030.
He said it will also help in increasing competition, quality service and fairness in conducting insurance business between public and government institutions. “So in short, to us in the insurance sector, this is a budget of hope,” he said.

According to the chairman of the Association of Tanzania Insurers (ATI), Mr Khamis Suleiman, there was no provision of law that forces owners to get an insurance policy for facilities and properties that accommodate a huge number of people at once.
“Sometimes, I tend to wonder what would happen if, for instance, a ferry capsizes? Would it be treated like the MV Bukoba, which was also owned by the government, which can decide to pay a certain amount for funerals, and that is all?” he queried.

Education stakeholders reacted to the government’s plan to extend fee free education to Form Five and Six saying it is a promising move but wanted the government to implement it in a timely manner as well as give quality of education a priority.
While presenting the Budget, Dr Nchemba announced the decision aimed at enabling Form Four graduates to have the opportunity to continue their studies up to Form Six, without the hindrance of fees.

According to the minister, a total of 90,825 and 56,880 Form Five and Form Six students, respectively, were in need of assistance, and the government planned to allocate Sh10.3 billion to help the group.
Speaking to The Citizen yesterday, a University of Dar es Salaam lecturer, Dr Faraja Kristomus, said the free education policy was a great step but challenging as well if the government will not honour its commitment to provide timely funding to help schools run.

He said the challenge significantly affected O-level education quality in government schools, thus it was important to take action so that the situation doesn’t get to advanced secondary level which for many years have been doing well in terms of performance.
“It is a very good decision especially at this time that we are faced with hardships of life but the problem lies in its implementation. If enough funds are not provided, the provision of Form Five and Six education will also decline,” he said.

“For O-level secondary schools we see the grant per student being Sh1700, in fact this money is too small, now if this programme is extended to form five and six, it is better this kind of amount be reviewed.”
For his part, Tanzania Education Network (Tenmet) coordinator Ochola Wayoga said the move will bring relief to parents and will increase the number of young people receiving tertiary education.