Tanzania's media on the spot over 2020 election coverage 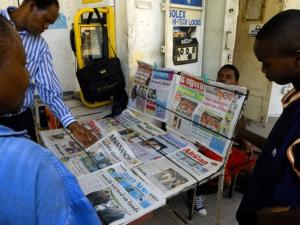 Dar es Salaam. The media fraternity has been criticised for unfair coverage of the 2020 General Election, according to findings of a new report.

The Yearbook on media quality in Tanzania report, published by the University of Dar es Salaam (Udsm) School of Journalism and Mass Communications (SJMC) highlights that most publications inclined towards CCM compared to other parties.

However, discussants urged the media to revert and address all the challenges that led to the noted findings.

Mr Katunzi said a similar trend was evident in Zanzibar where CCM presidential candidate Hussein Ali Mwinyi was covered by 69 percent as compared to 31 percent for ACT-Wazalendo’s Seif Shariff Hamad.

“Other media coverage registered a fair coverage of 60 percent (CCM) against 59 percent (ACT-Wazalendo). In other words, the opposition presidential candidate in Zanzibar was comparatively better covered than counterparts in the Tanzania Mainland,” he said.

He said Uhuru and Mzalendo gave 94 percent coverage to CCM presidential candidate Magufuli as compared to 19 percent made to Mr Lissu.

Furthermore, he said overall reportage was largely event-based, with only 19 percent of the coverage initiated by the media and journalists.

“Multiple sourcing which makes reporting more authoritative was minimal per story. Radio performance was worrisome, with 52 percent of their stories having single sources followed by print at 43 percent and television at 38 percent,” he said.

According to him, the media excessively amplified the voices of candidates with disproportionate representation of voters’ voices who are critical players in the election.

“Only 10 percent of media units are sourced from ordinary people. Similarly, female sources were less visible at 20 percent of election related stories,” he said.

Report findings also blame the media for focusing on messages from political parties and their respective candidates, but neglecting the opinion of citizens.

Mr Katunzi said crackdown on the media, censorship, political situation between 2015 and 2020 as well as financial crunch during that period were among the causes of what transpired.

“Media outlets have been recommended to impart professionalism to its journalists and address financial challenges. The government has been called on to review laws and regulations to improve media operationalisation,” he said.

“Today, front pages are dominated by stories about the government and leaders. The same happened shortly after independence until the day Mwalimu (Nyerere) rejected the trend. However, we have gone back,” he said.

The Media Institute of Southern Africa-Tanzania Chapter (Misa-Tan) chairperson Salome Kitomari demanded the wide distribution of reports and put into consideration the welfare of journalists.

“Laws and regulations in enabling operationalisation should be reviewed alongside comparing and contrasting similar trends in East Africa and Southern African regions respectively,” he said.