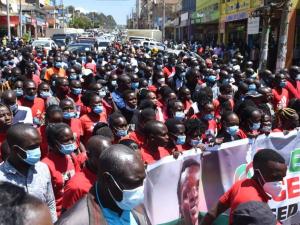 Thousands of athletes, coaches and residents of Eldoret town brought the Uasin Gishu capital in the Rift Valley to a standstill on Friday during the procession in honour of the late former World Cross Country champion Agnes Tirop.

Holding a giant banner with the phrase "End Gender-Based Violence" and with Tirop's images emblazoned on it, the message was clear - the athletics fraternity is fed up with the domestic squabbles that have now taken one of the country's rising stars.

Tirop, who was found dead in her home in Iten, Elgeyo Marakwet County last week, will be buried on Saturday in her parent's home in Kapnyamisa Village, Mosoriot, Nandi County.

Police have said that Tirop's husband, Ibrahim Rotich, is the main suspect in the murder of the two-time World Championships medallist. He was arrested last week on Friday in the coastal town of Mombasa and has since been in custody awaiting trial.

After a brief prayer session and viewing of the body at the Eldoret Hospital Mortuary, the mourners, led by hundreds of world-beaters, took to the streets of Eldoret in a procession that lasted close to two hours.

The procession ended at 11:38am at Rivatex, along Kisumu Road in Eldoret town, before they proceeded to Kapnyamisa Primary School in Nandi Couny where the requime mass will be held from 12:30pm.