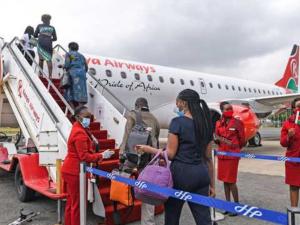 Three national airlines in the region — Kenya Airways, Uganda Airlines and Air Tanzania, — are flying in the loss-making zones and could remain in trouble for years to come, experts have warned.

For instance, Uganda Airlines, in the news for the past fortnight as a parliamentary oversight committee probed its operations, could remain trapped in the loss position for decades, experts on airline business have observed.

Sources say the airline is expected to report further losses for the 2021/22 financial year that ended in June. The losses, though anticipated at this stage of the business, will be well over initial projections, driven by a mismatch in revenue growth and cost escalation as the airline launched its first intercontinental flight to Dubai last October, and a sharp rise in fuel costs as the air transport industry restarted globally.

The parliamentary probe revealed that the airline made losses worth Ush164 billion ($43 million) during 2020/21 fiscal year. That figure represented a 37 percent deviation off projections for the year. It is again expected to be off-target by 53 percent in the numbers that will be reported for the financial year that ended last June.

According to its embattled chief executive Jenifer Bamuturaki, however, the absolute loss is much lower than the reported Ush164 billion ($43 million) because Ush77.4 billion ($20 million) was the book value for depreciation on aircraft and not actual cash outflow.
“When you factor in the Ush14 billion ($3.7 million) that went back to the Treasury as taxes, our actual loss position comes to around Ush86 billion ($22 million),” Ms Bamuturaki told The EastAfrican. She said the country should brace for a longer short-run curve because new routes such as Guangzhou, expected to be launched in the next couple of months, followed by London and Mumbai in the first quarter of calendar 2023, will drive up costs.

“We are riding a seesaw. Every time we launch a new route, it takes us back along the cost line because until it matures, it will be a drain on revenues from the existing routes,” she said.

The CEO anticipates a 38 percent increase in costs in 2023, followed by a 67 percent reduction in 2022. The gains are expected from a rationalised network that should see increased traffic and aircraft utilisation.

The airline is operating only half of the 21 routes — 18 regional and three intercontinental — that it should have been operating by now. Passenger numbers doubled to more than 217,000 in 201/22 and are expected to cross the 0.5 million mark on the introduction of Guangzhou and London routes.

Independent observers of the Uganda Airlines say its current financial position is not only a result of the operating environment, made difficult by the Covid-19 disruptions but also because of structural issues.
“It does not matter who you bring to manage that airline, it will stay in the loss position for the next 20 years until the structure of its balance sheet is addressed,” said retired airline administrator Fred Ochieng Obbo.

According to him, the primary problem is that, rather post the cost of aircraft acquisition as shareholder equity, that value continues to be reflected on one side of the balance sheet as assets and on the other as debt.
“There’s no way you are going to escape an accounting loss with such a balance sheet and the long gestation period before routes break even,” Mr Obbo said.

According to Ms Bamuturaki, however, the contradiction will be resolved when the share capital of the company is revised upwards. The company was registered with a capital of 100 shares valued at Ush2 million ($525) each, equivalent to Ush200 million ($52,529). Total government investment is now in excess of Ush1.6 trillion ($420 million) but it is not reflected as equity.
“So, for now, we are recording that money as share application fees and I don’t see it imposing long-term drag on our accounts,” she said.

But it is not only Uganda Airlines that is fluttering in loss territory. The region’s national airlines are facing turmoil even as state owners refuse to let go and continue pumping in more cash.
The airlines have faced rising global fuel prices, uncompetitiveness, revenue losses and reduced passenger numbers as most people opt out of expensive travel.

This is the ninth consecutive half-year loss for an airline that has benefited from several state bailouts, the latest being Ksh20 billion ($166.7 million) in a supplementary budget passed by the 12th parliament.

Air Tanzania has continued to tout an ambitious plan for international routes expansion, with new links to West Africa come 2023, despite being flagged twice in recent government audit reports for continuing to rack up huge operational losses. According to managing director Ladislaus Matindi, plans are being finalised to introduce flights from the airline's Dar es Salaam hub to Lagos, Nigeria, and Accra, Ghana, "once we have more planes on our current fleet.”

It will be the latest chapter in the national carrier's renaissance strategy after resuming flights to Guangzhou, China, in July, but comes against the backdrop of the latest findings by the Controller and Auditor General (CAG) that ranked Air Tanzania sixth among government firms with biggest debts in the 2020/2021 financial year.

In 2021, CAG Charles Kichere, said ATCL had incurred losses of Tsh150 billion ($64.6 million) over five years, including Tsh60 billion ($25.8 million) in the financial year under review.

In his audit report for the financial year 2019/2020 and the Prevention and Combating of Corruption Bureau (PCCB) report for 2019/2020 to President Samia Suluhu Hassan, he revealed the company had incurred Tsh12.4 billion ($5.3 million) in interest in the financial year 2019/21 on debts of Tsh45 billion ($19.4 million) accrued over five years.
Between March and June 2020, ATCL had been charged Tsh15.4 billion ($6.6 million) for aircraft leases while not flying commercially due to Covid-19 restrictions.

ATCL expects to take in four more new aircraft before the end of next year to ramp up its current fleet of 12.
The additional planes will be another Dash 8-Q400, another Boeing 787-8 Dreamliner, two Boeing 737 Max-9s and one specification-based Boeing 767-300F Freighter.

Former president John Magufuli initiated an expensive revival programme for the then struggling national carrier when he took office in 2015, targeting a boost in tourist numbers.

Despite a massive outlay of over $700 million on new aircraft sanctioned by the Magufuli administration during the five and a half years of his tenure, ATCL’s revival has continued to flounder on rocky ground, a situation exacerbated by the coronavirus pandemic.

Jet fuel, which was the largest contributor of overheads in the half-year period, pushed overall operating expenses to Ksh53.1 billion ($442.5 million) from Ksh34.6 billion (Ksh288.3 million) in the corresponding period last year.
“These results were affected by the high price of aviation fuel, which is over 65 percent more than last year,” said Michael Joseph, KQ chairman.

Mr Joseph added that the airline would have returned an operating profit of Ksh1.5 billion ($12.5 million) in the half year had the fuel prices not run out of control.
“Fuel costs account for between 10 percent and 12 percent of airline operating costs, and it will shift the operating calculations for any carrier, with Kenya Airways expected to be hardest hit as its fuel takes up an entire quarter of the airline's expenses,” said Mr Joseph.

According to the African Airlines Association, airlines on the continent are likely to post losses of up to $4.1 billion this year on the back of expensive jet fuel. This is equivalent to 23.4 percent of 2019 revenues. KQ’s losses tripled to $333 million in the 12 months to December 2020 as Covid-19 containment measures cut passenger levels to their lowest level since 1999.

Mr Joseph explained that during the first half of 2022, operations were positively impacted by pent-up demand and the removal of travel restrictions, resulting in a strong and sustained recovery in trading performance compared to a similar period in the prior year.
“The opening of the borders worldwide has led to quick rebounds in some key markets. Lingering travel restrictions in some markets have limited recovery,” said Joseph.

Since the Russia-Ukrainian war in February, 2022, cargo air freight and air tickets charges have increased to match the rise in jet fuel prices, engaging a reverse gear to an industry already struggling with post-Covid-19 recovery.

The airline missed the opportunity to resume aviation fuel hedging after price volatility drove up its costs despite intentions to do so. “We did not hedge fuel this period because any decision on this would have been made last year,” said Allan Kilavuka, the KQ chief executive officer. “Despite the challenges, the industry is experiencing recovery. Our focus is to ensure that we strengthen our operational resilience through innovation and diversification to deliver great and reliable services to our customers.”

KQ suspended fuel hedging in 2016 after contract losses sent it deeper into the red.
The Covid-19 pandemic hit the travel industry, with the airline having to ground its services for months to curb the spread of the virus.
The call for vaccines slowed down the recovery process as some countries such as China closed their airspace.

Despite the challenges, KQ carried 1.61 million passengers during the period, an 85percent improvement compared with the prior year's 0.87 million passengers.
“We have transported the airline during the pandemic, enabling us to emerge with renewed strength, underpinned by a product network and services that customer’s value,” said Mr Kilavuka.

The International Air Transport Association is confident global airline passenger numbers will reach 83 percent of pre-pandemic figures in 2022, and the aviation industry's recovery to profitability will be within sight despite ongoing uncertainties. In recent years, Kenya Airways has received a series of government bailouts, including support due to the effects of Covid-19 pandemic.

It even sought to raise funds by requesting permission to run the profitable Jomo Kenyatta International Airport. This request was blocked by Parliament, citing possible loss of jobs and public revenue. The airline has benefited from several State bailouts, including Ksh36 billion ($300 million) to be disbursed in the current financial year on condition that the airline after achieving targets according to the Ministry of Transport.

Despite the frequent bailouts, the airline continues to make losses prompting Kenyans on social media to question why the government continues to bail it out. Explaining why governments hold on to their airlines despite the losses, Fred Ochieng-Obbo, a Ugandan legal expert in aviation and former airline executive at Fredrick & Associates says it is largely an image issue.

“The truth of the matter is that airlines hold a special place in the heart of people because they often carry the name and the flag of the countries they represent,” said Ochieng-Obbo.
“This is despite the fact that this emotional attachment isn’t enough to ensure the financial sustainability of national airlines.”
Kenya Airways, Uganda Airlines, South African Airways, and Ethiopian Airlines have survived against the odds, but a high cost to the taxpayer.

According to Mr Ochieng, the airline industry is very sensitive to economic cycles such as the Covid-19 pandemic, the Ukraine-Russia crisis, and the international fuel price hence requires strong management and an immediate financial support.

“There is a lot that goes into managing an airline. Sometimes we blame the political leaders too much yet the blame should be laid squarely at the feet of those airline managers,” he said.

Running an airline is a very expensive affair as one needs assets like aircraft, and highly trained personnel, including pilots, flight attendants and mechanics, to carry out safe and high quality operations.
https://www.theeastafrican.co.ke/tea/business/three-east-african-carrier...