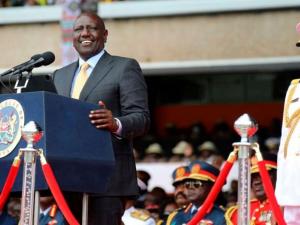 The overwhelming congratulatory messages to Kenya’s new government from leaders of other countries in Africa and globally shows clearly the world’s eagerness to deepen engagements with President William Ruto.

But the incoming government should be aware of the enduring maxim of international relations theory that “states pursue their self-interest”, diplomatically referred to as state centrism.

Typically, whenever there is a government transition, most allies become anxious due to the relative uncertainty that accompanies a change of regime. This is not gainsaying, because ‘a nation’s head of state is its diplomat number one’. His dictates can shape and reshape the reorientation of the state’s foreign policy.

States that had lukewarm relations perceive this transition period as their opportunity to recalibrate bilateral relations to suit their own national interests. As such, new governments need to utilise such periods of uncertainty and attraction – at the onset – to solidify their foreign policy objectives.

Noting that foreign policy plays a critical role in pursuing national priorities, the following are some of the main foreign policy issues that should take precedence for the Ruto government.

The government should deliberately seek to deepen its engagements with states that offer opportunities for economic development and prosperity. There should be a shift from the foreign policy of prestige and politics to one of economic growth. It should look for new partnerships while enhancing existing markets and economic opportunities in the expanded East African Community (EAC).

With its vast land mass, mineral wealth and a population of about 100 million, the Democratic Republic of Congo is a case in point. The others are the emerging markets in the Middle East, South East Asia, Eastern Europe and Latin America.

There should also be deliberate and focused participation and agenda-setting in the African Continental Free Trade Area (AfCFTA) body. The new government should support and fast-track the recently launched ‘Kenya AfCFTA National Implementation Strategy’ that seeks to deepen Africa's trade integration.

The aim is to enhance and exploit economic opportunities inherent in intra-Africa trade. The government should seek Foreign Direct Investments (FDIs) that are hustler-based. This means business operations that are labour-intensive or provide employment and entrepreneurial opportunities for the unemployed youth.

The partnerships should promote value-addition for hustler enterprises, and establish and promote small industries/factories at the grassroots level across the country, utilising a high content of local material. It should also seek partnerships that will help revive the collapsed industries such as sugar, textiles and paper, and those that will turn around Kenya Airways.

The ‘Look East Policy’ (China) has created alternatives that Kenya can leverage to increase its bargaining power to negotiate better deals with the United States and European countries, among other economies. The government should reinvigorate relations with traditional allies – the US, the UK and Western Europe – while also redefining Kenya-China relations so as to align them to Nairobi’s trade and investment interests.

The government should enhance diplomatic relations with emerging powers such as Brazil, South Korea, Asian Tigers, and states in South East Europe such as Serbia and Bulgaria, which provide new frontiers for deepening existing relations. In this context, President Ruto, as a former successful Agriculture minister, needs to prioritise scrutinising why Ukraine, a country that gets severe winters, can produce foods like wheat without which the world is thrown into a famine spin. Zimbabwe has already drawn lessons and is reaping abundant harvests. Yes, Kenya can.

The government should scrutinise commercial agreements with a view to renegotiating foreign debts so that Kenya does not transfer all its revenue to pay debts and, worse, mortgage our beloved country as indeed some regimes have done.

China is Kenya’s biggest foreign creditor after the World Bank. It accounts for about one-third of Kenya’s 2021-22 external debt service costs.

But the elevation of Kenya to middle-income status has seen China omit Kenya from the list of African nations that will receive China’s debt relief in 2022. This is reason enough for the new government to adopt the foreign policy of ‘eggs not quarrelling with stones’ and renegotiate China’s debt diplomacy.

Vital national interests include a shift from the foreign policy of aid to trade. It is acknowledged that China has been a commendable development partner. However, the government should quickly move to reviewing our bilateral relations with a view to assuring Kenyans that it is a mutually beneficial diplomatic relationship that goes beyond loans.

Strategically, the incoming government should move to encourage China that relations with Kenya will in fact be better and deeper if it based some of its manufacturing and processing in Kenya. This, apart from creating local employment, will reduce the country’s dependency on imports while curbing the depletion of foreign exchange.

Regional balance of power and integration

Kenya should endeavour to structure a balance of power in the East and Horn of Africa region in line with its national interests. It should take its rightful place in the East African Community, and this may include agreeing to amend the treaty to have member states contribute finances for running the secretariat according to their economic strength.

Strategically, the incoming regime should enhance its relations with Uganda, Burundi and South Sudan, while at the same time accelerating its entry into the DRC.

Indeed, the government should fast-track the realisation of EAC objectives and support South Sudan and the DRC to actively participate in regional integration. Ruto should maintain an open and non-disruptive relationship with Rwanda and Tanzania.

In the Horn of Africa, Kenya should diplomatically endeavour to reduce Ethiopia’s stranglehold on Igad and gradually restore its leadership position as a founder member of this organisation. Kenya should maintain its ties with Ethiopia and eschew taking sides or interfering in Addis Ababa’s internal affairs (internal conflict).

In fact, the congratulatory messages from Ethiopia and Igad, which is led by Ethiopian Workneh Gebeyehu (executive secretary), point to the goodwill and expected deep partnership between Ethiopia’s leader and President Ruto. Kenya should forge closer ties with the great African powers such as Egypt, Nigeria, South Africa and francophone Africa to make it easier to push her agenda through at the African Union.

The question of Somalia

With the exit of president Farmaajo, Kenya should continue playing a leading role in shaping political development in Somalia. Kenya should give full support to the current regime of President Hassan Sheikh Mohamud, not just in terms of security but also economically and personnel training. There is a need for the incoming government to deepen engagements and collaboration with Somalia in security, trade and investment.

Gradually, Kenya should start renegotiating the status of Kismayu with a view to harmonising relations between the Federal Government of Somalia and the regional state of Jubaland. Recently, Somalia expressed interest in joining the EAC; the Ruto government should re-examine this endeavour on a cost-benefit analysis.

The war in Ukraine has the potential to disrupt the global structure. Alliances are shaping up, with Russia most likely teaming up with China and India to recreate a new global order. In this case, the Ruto government should adopt a ‘wait and see’ foreign policy strategy.

Kenya should maintain its global allies in the war against terrorism. While partnering with like-minded countries in countering terrorism in the Horn of Africa, Kenya should avoid taking strong stands that will trample its historically revered image of a neutral arbiter.

The stance would help avoid antagonising its emerging relations with the Arab, Gulf or Middle East states in the context of economic cooperation. Kenya should critically examine the role and interests of states like Turkey and the UAE in Somalia. Even so, Kenya should be open to partnerships that seek to restore peace and security in Somalia.

The Israel factor in international relations

Israel’s quest for observer status at the African Union (AU) and the strategy of expanding its influence in Africa so as to counter the continent’s sympathetic stance towards Palestine, among other national interests, define its rapprochement with Kenya and the continent.

For years, Kenya has served as Israel’s gateway to Africa. The Ruto government should leverage this and review Israel-Kenya relations with a view to enhancing economic ties beyond the existing political relations.

The new government should be cautious not to contradict the African continental position that is sympathetic to the struggle of the Palestinians, but at the same time have an open mind in understanding Israel’s apprehensions cognisant of the fact that trust is key for peaceful neighbourly coexistence.

The Ruto government should revisit the 1990s foreign policy of conflict management where high-ranking Kenyans led mediations and peacemaking efforts in the region. It should rebuild the dwindling pool of Kenyan mediators, negotiators and peacemakers who can be deployed as special envoys in peacemaking initiatives regionally and globally.

This can be multilateral through Igad and the AU or bilateral with relevant states. Kenya should take a leadership role in peacemaking efforts in Somalia, the DRC and South Sudan conflicts. In this way, Kenya will shape and benefit from the post-conflict opportunities in the affected countries.

However, there should be a change in approach so that Kenya does not appear transactional (appearing to want all or bidding for every available opportunity) in its relations with other states. Instead it should adopt a give-and-take strategy.

There should be a deliberate focus on, participation and enhancement of intra-Africa trade beginning with neighbouring countries. President Ruto’s government should review the written foreign policy document of the outgoing government. It should specifically revamp and improve cultural and diaspora diplomacy, securing partnerships for the safety of Kenyans working in the Middle East.

Labour agreements should be anchored in memoranda of understanding at a bilateral level before Kenyans are left to perish in the Middle East. Embassy staff should be tasked with accessing the Kenyans and reviewing compliance with these terms.

Further, the government should redirect foreign policy to explore trade and employment opportunities for Kenyans in Sudan, Tanzania, the UAE, Canada and other untapped regions. Overall, there should be continuity, with a gradual infusion of change in its foreign policy.