A Trip To The Potter’s House 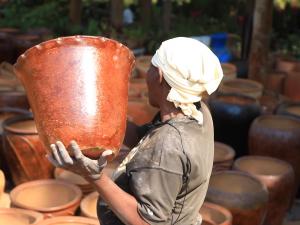 Mukarusanga Zouraika, a mother of six and grandmother did not go into pottery by accident, neither did she go to school to acquire pottery skills.

She found herself a potter, but if you asked her to choose three other professions, she would return the template with one word “pottery”.
Member of a cooperative of potters – Abakomezamwuga from Kinyinya sector, Gasabo district, Mukarusanga is good at numbers because she finished Primary and brilliantly won primary six exams four decades ago.

However brilliant she is, Mukarusanga cannot count the number of styles she can make in a pot because she can create any idea a client would bring.
“You can bring me any sample and I make it for you with my hands and my clay.”

Her life in pottery is a long journey which he took us through when we visited her on a working day last month.
It was in 1973 when she lost her mother in her native Rwamagana district, Eastern Province. After this loss, the father and her three siblings said:” You are the only girl that we have got here to take over from your mother’s responsibility. Therefore, you have no choice.”

The clay in the hands of a potter
In their culture, said Mukarusanga, men were in charge of bringing clay and to fire pottery while women were in charge of making pots.
“I was ten years old when I started making pots. I would go to school in the morning or evening alternatively only to find an amount of the clay waiting for me after school,” she said.

“It was a difficult challenge because my mother who would teach me was no longer, but I managed; starting with cooking and water pots, I graduated to huge pots destined to contain local brew – Ikigage fermentation,” she said.

She made pottery a career, and her fiancée who also happened to be a potter found her in the job and they continued the journey together as one.
“To some extent, we realized that our village in Muhura was not a good market. We learnt that we could find greener pasture in Kigali and we relocated to the capital Kigali early 1992,” she said.

The person who gave Mukarusanga’s family a tip about a huge market opportunity in Kigali was not a liar.
Once in Kigali, Mukarusanga was introduced to modern pottery, especially meant for decoration and gardening purposes.

She quickly learnt it, and ever since, she has never been the same.
After mastering, she joined the cooperative where they make pots for clients who have discovered the beauty of pottery and ceramics in their traditional look and row material-the clay.

Some like them colored, others love to see them simply fired without any addition on the clay, especially foreigners.
Clients include individual people, corporates, public institutions who buy either in small quantity or place an order for bulk.

Products are too many for the 30 members to know what they have made. Now worries, everyone knows a sign to put on whatever pot they make
It is a profession where she earned the living of her family including in raising school fees for her children.
“I built a home from this work, bought home equipment and came together for mutual support with my colleagues in this cooperative,” said Mukarusanga.

The kiln that serve to fire the pottery at Mukarusanga’s cooperative. She is the chairperson of the cooperative’s audit committee
She has great memories in this work, but she will never forget how a high ranking official once made their profession proud.
“Someone had bought flower pots for Kigali Convention Centre, but when their boss realized that they were made from cement, he ordered that they rather find pots made out of the clay and we won the tender,” Mukarusanga recalls.

Mukarusanga’s pots at Kigali City Hall
“My only wish is to have our society allow us to sustain this profession of ours. We cannot go to farming because this is the pride our community since time immemorial,” Mukarusanga said while referring to rumors according to which the city of Kigali is looking forward to restoring the wetland where they extract the clay for “environmental protection.”
https://www.ktpress.rw/2022/09/a-trip-to-the-potters-house/