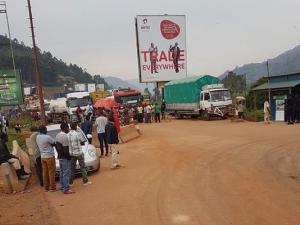 Uganda has now admitted that there is a "slight problem" at all three border posts with Rwanda.

Both Kampala and Kigali had denied reports that cross border movement had been suspended.

Mr Opondo accused Rwanda of refusing to allow both private and public vehicles from entering Uganda since Wednesday evening.

"They even prevented their own people from coming to buy daily necessities," he said, adding that even school children were blocked from crossing into Uganda for studies.

On Thursday, Rwanda Revenue Authority issued a statement saying it was restricting cargo trucks from Uganda from entering the country at Gatuna/Katuna to allow for the completion of infrastructure upgrade at the one-stop border post.RRA advised motorists to use Kagitumba/Mirama Hills border post instead.

But, by the time the announcement was made, citizens of the two countries had been complaining of being stranded at the border post.

“If there's any other reason beyond the construction works they have given, Mr Sam Kutesa is in engagement and we hope that this matter will be resolved quickly,” Mr Opondo said.

The cross-border row is the latest dispute in the longstanding feud between the two neighbours, who accuse each other of espionage.

For ordinary citizens, the deteriorating relations that have largely remained at the top, now seems to have moved to the grassroots, interrupting their lives.

Kigali accuses Kampala of harassing its nationals through arrests and torture and has been advising Rwandans to restrict their travel to Uganda. Kampala denies the claim saying those detained are individuals suspected of spying.

“If you have a Rwandan passport, we cannot take you to Uganda. People are not allowed to cross. I don’t know when this will end but that is how it is. But if you have a Ugandan passport, you can be transported from Rwanda to Uganda,” an official at Volcano Bus Services told The EastAfrican.

Modern Coast bus company issued a statement to its passengers saying that since the Gatuna border has been closed temporarily, "this will affect travel into and out of Rwanda. We will update you on further developments.”

At its Nairobi office, a Modern Coast official told The EastAfrican that they were not taking parcels destined for Rwanda.

When The EastAfrican visited the Gatuna border on Friday, foreigners were being allowed to cross to and from Rwanda.

Rwandan Immigration officials told citizens the restriction in place was due to security concerns.

"Just be patient. It's for your security that you won't be allowed to go to Uganda," an immigration official responded to pleas from Rwandans.

"Do you want to cross to Uganda and be mistreated? They will arrest and torture you. We will not allow you and other citizens to take that risk," the official told them.

For those allowed across the border, the travel costs have tripled as taxi drivers take advantage of the unavailability of buses.

Construction of the Gatuna/Katuna OSBP, the main gateway between Rwanda and Uganda, began in 2014 but faced funding challenges after World Bank pulled out.

The works at the border resumed earlier this month, funded by the respective governments.