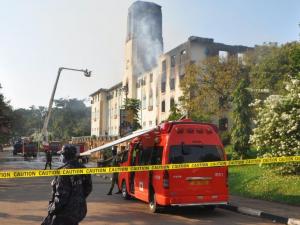 Two security guards have been arrested as Uganda police commenced investigations into a fire that gutted Makerere University's main building on Sunday.

The Director of Criminal Investigations Grace Akullo camped at the country’s oldest university as her team tried to establish what could have caused the fire at the building which houses the institution’s key offices.

Those arrested are two police officers – one who should have been on duty at the entrance of the Main Building which caught fire just after midnight, and another from the university’s internal security. The third officer was still at large by Sunday evening according to Ms Akullo.

“We have two security officers in our custody helping us with investigations. They were supposed to be guarding [the university] but for some reason, they were not there. They have recorded statements. They are with us,” she said in an interview with Daily Monitor on Sunday.

At 4pm, police officers were asked to enter the office of the vice-chancellor, Prof Barnabas Nawangwe, to remove documents that had not been burnt.

Efforts were also being made to retrieve some documents, including 28 land title deeds kept in a safe in the legal department.

“Police inquiries have commenced. We are going to investigate and find out what happened, whether it is arson or any other cause. At the moment, it is still early to say what has caused the fire,” Ms Akullo said.

The university was already preparing for its centenary celebrations slated for January 2022.

Although the burning of the iconic building is a setback, Prof Nawangwe said it will be reconstructed before the big day.

There have been past fire incidents at the university and Prof Nawangwe said processes are underway to at least insure key buildings, the library and the senate.

“We were in the process of insuring the key buildings but because we have to go through government payment systems, the accident happened. I am sure everybody will now support us to expedite the process,” he added.

Prof Nawangwe explained that the university had no fire hydrants to support the firefighters.

“That is the most unfortunate part. This university is very old. There is no fire hydrant. We have to now put hydrants around major buildings and the whole campus. We were planning to start in 2021. It was in our budget. We will have fire hydrants on all our university installations,” he said.

Ms Jackie Ayorekire, the head of planning at the university, said she suspected someone with a sinister motive was behind the fire.

“Why now? Why finance? Why Sunday? A lot is suspected. It’s a season of audit. It was ongoing,” Ms Ayorekire said.

Ms Ronah Magara, the university council’s chairperson said, “This university has raised many figures across the country and globally. It is a difficult time for us. It is very unfortunate. We don’t want to speculate. The university has many rooms which we can use for now.”