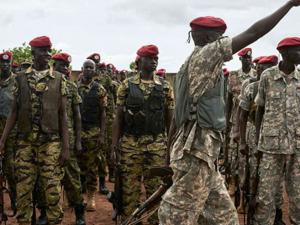 A military confrontation over a disputed border area between South Sudan and Uganda has claimed the lives of two South Sudanese soldiers.

According to South Sudan People’s Defense Forces (SSPDF), on Tuesday, Uganda’s People Defence Forces (UPDF) launched an attack on an army post it claims is situated within South Sudan, leading to the killing of its soldiers around Pogee area, Magwi County of Eastern Equatoria State.

But the Ugandan army insists that it opened fire on South Sudanese military officers who tried to encroach into its territory by placing a border post at an area located two kilometres from Ngomoromo border in Lokung Sub-County.

In June this year, a similar incident occurred around Fitina-Mbaya, also called Buya, a contested part of Kajo-keji County in Central Equatoria state. Four South Sudanese soldiers and a police officer were shot and killed by the UPDF.

Speaking to The EastAfrican on Thursday, South Sudan’s army spokesman, Gen Lul Ruai, confirmed the killing of its officers by UPDF around Pogee area of Magwi County.

“A unit of the Ugandan Army armed with heavy artillery pieces and a light military truck launched an attack on the South Sudan Army defensive border outpost in the area. The brief exchange of fire reportedly led to death on both sides.

“In those exchanges, one SSPDF soldier has been taken prisoner, while the bodies of those killed are in the custody of the UPDF,” said Gen Ruai.

“Initially, the soldiers were erecting a roadblock which was assumed to be two kilometres inside Uganda. The reaction of forces who went to verify occurrence resulted in the clashes.

“I think diplomatically, our leaders have held a meeting and we shall continue to work together to ensure that there is understanding along our borders and such clashes should not divert us from the bigger picture of the security of our borders,” said Lt-Col Asiimwe.

He, however, claims that the bodies of two killed South Sudanese army men together with their weapons were handed over to South Sudan’s local army authorities in Magwi County, Central Equatoria state.

At the time of going to press, where the bodies were as the two armies gave contradictory statements.

Mr Lazarus, who heads Support Peace Initiative Development Organisation -- a peace advocacy organisation -- said the area seems to be rich with natural resources such as timber and minerals, among others, which might have triggered the conflict.

“When you look at most of these land disputes happening around the border, there seems to be huge competition over local resources.''

Uganda claimed the SPLA soldiers had erected a barrier six kilometres into Ugandan territory and hoisted their national flag.

Since attaining self-rule in 2011, South Sudan has had several run-ins with Uganda over ownership of some border areas.

The two countries in 2017 agreed to redraw their common border in an effort to end the long-simmering conflicts.

They formed a joint committee made up of 26 members to resolve the dispute. The committee also held talks in mid-January in Uganda’s northern district of Lamwo.

But little has materialised regarding the committee’s work, according to observers.