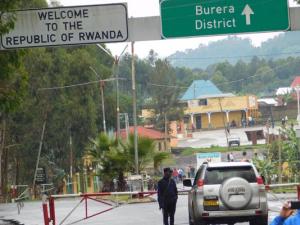 Uganda is considering petitioning the East African Community (EAC) Secretariat in Arusha, Tanzania, to challenge what it perceives as Rwanda’s economic sabotage in breach of the regional bloc’s guidelines, a minister said Sunday.

Mr Philemon Mateke, the state minister for regional cooperation, told Daily Monitor that he would confer with his senior line minister, Mr Kirunda Kivejinja, on the petition “because interfering with cross-border trade by Rwanda violates the East African Community guidelines yet it (Rwanda) is the chair of the community.”

President Kagame, the immediate past African Union chairman, succeeded President Museveni as EAC chair last month amid rising tension and long-standing counter-accusations, including claims that either government is propping up subversive elements against the other.

Kigali at the end of last month abruptly stopped vehicles from Uganda from entering Rwanda through Gatuna, citing ongoing construction works at Gatuna side of the frontier.

A senior official familiar with the goings-on between the countries, but who asked not to be named due to sensitivity of the matter, said Rwanda’s last-minute notification about closing Gatuna border post was suspicious because road works are planned in advance, and was not likely to have informed its sudden decision.

Rwanda’s foreign minister Richard Sezibera followed with a tweet on March 1 in which he warned Rwandans against crossing to Uganda, claiming Rwandans were being targeted in ongoing arrests, torture and harassment.

“This is for their own security. Ugandans in Rwanda or travelling through Rwanda are safe,” he tweeted.

In an interview with The East African last month, President Kagame responded to the question, "Do you think things are getting worse or improving between Uganda and Rwanda?" thus:

“There is a good foundation from which we should be building a very good relationship...it is very intriguing to find that we have something like this (tension) going on. And it goes on every day, even as we speak.”

The matter, he noted, must be resolved “because the alternative is not something that we should even be thinking about, or entertaining; that we can stand in the way of our own progress or the progress of all East Africans.”

After days of quiet, Uganda opened up, with Uganda Media Centre executive director Ofwono Opondo dismissing the allegations by Kigali against Uganda, including of indiscriminate incarceration of its nationals, as baseless.

At the time, Rwanda shared on social media what it said was a list containing particulars of 40 Rwandan citizens taken into custody by the Chieftaincy of Military Intelligence (CMI), according to Rwanda’s State Foreign Affairs Minister Olivier Nduhungirehe.

He claimed that more than 800 other Rwandans had either been deported or refused entry to Uganda since January 2018. The Monitor could not independently confirm the allegation that Kampala has since rubbished.

Mr Opondo noted in a tweet that contrary to Mr Nduhungirehe’s assertion, some of the individuals named on the impugned list were duly charged in courts while some held refugee status and cards but regularly criss-crossed to Rwanda, “raising suspicion”.

“Others entered Uganda as [Congolese] nationals seeking asylum and some are Ugandan citizens with passports,” he tweeted, adding:

“There’s no witch hunt [of] Rwandese in Uganda. We would like to send a clear message to Rwanda that there’s no one Uganda is harassing from Rwanda or has in custody.”

The Ugandan ambassador to Rwanda, Ms Oliver Wonekha, Sunday wondered why the Rwandan government has advised its nationals not to enter Uganda without official communication.

Rwanda has diverted long-haulage vehicles from Uganda to Mirama Hills border post, an alternative route to Kigali which is 110km longer and more expensive on fuel and auxiliary costs.

About 37 trucks cleared by Ugandan officials at Gatuna customs point four days ago, by Sunday evening remained holed up at no-man’s land and Mr Emmanuel Bamanya, a Ugandan customs official, said recalling the trucks to ply through Mirama would require “special arrangement” because they, by official record, have exited Uganda.

“There is no way I can return to Uganda to pass through Mirama Hills border in Ntungamo District. I will remain here in the no-man’s land until the situation normalises,” one driver said, asking not be named.

Traders trucking perishables have dipped in the red, and costs have piled for the transporters from parking levies to feeding and accommodation.

Mr Sam Sserwanga, who chairs the association of clearing agents at Gatuna border town, asked Rwanda to allow vehicles already cleared through Katuna prior to Rwanda’s restrictions to proceed to Kigali.

Uganda earns multiple times more in exports to Rwanda, which is its third largest East African trading partner after Kenya and South Sudan, than the forex earning Kigali picks from Kampala.

Uganda last year raked in $197m from exports to Rwanda, lower than the $254m peak earning three years, but still ten-fold higher than $20m worth of Rwandan exports to Uganda.

Mr Milton Rahuka, the officer in-charge customs for western region, said traffic through Mirama Hills border point was normal from last Friday and that they had cleared 181 cargo trucks to exit to Rwanda.

Katuna Town mayor Nelson Nshangabasheija said he suspected the problems between Uganda and Rwanda were bigger than the official tiff over border access and alleged arrests.

“The problem looks more complicated and it requires the urgent attention of the two heads of states,” he said.

The traders’ chairman at Cyanika border town in Kisoro District, Mr Geoffrey Barore Nombe, at the weekend said the border there had been closed for four days yet there was no construction going on the Rwandan side.

“All Rwandan nationals that have been crossing to Uganda through Cyanika border have been stopped. As business community, we are worried,” Mr Nombe said.

This border post clears about 70 cargo vehicles crossing to Rwanda during normal business, Mr Rogers Beingana, its head, said. He also said about 20 trucks were stuck there.

Mr William Kiwarabye, a truck driver transporting fish, said he has been stuck at Cyanika border town for three days and the fish had started decomposing after he was denied entry into Rwanda.

Uganda's Prime Minister, Dr Ruhakana Rugunda, last Friday appealed for calm, saying the Uganda-Rwanda problems would soon be resolved, but gave no timeline or specifics of the problems.

Richard Sezibera, Rwanda Foreign Minister: “As explained to many journalists, all Rwanda’s borders are open. Trucks and heavy vehicles are advised to use Kagitumba due to ongoing construction at Gatuna. Rwandans are strongly advised NOT to travel to Uganda due to ongoing arrests, harassment, torture.”

Ofwono Opondo, executive director, Uganda Media Centre: There’s no witch-hunt for Rwandese in Uganda. There’s also nobody from Rwanda being held by the Ugandan authorities for any reason. We would like to send a clear message to Rwanda that there’s no one Uganda is harassing from Rwanda or has in custody.”

Mr Olivier Nduhungirehe, Rwanda’s State Minister for Foreign Affairs/Regional Cooperation: This (Ofwono Opondo) statement is factually and demonstrably incorrect. There are more than 40 #Rwanda-n citizens languishing in cells of Uganda’s Chieftaincy of Military Intelligence (#CMI) and more than 800 Rwandans who were deported from or refused entry to #Uganda since January 2018.”

Article 104 of the East African Treaty on free movement of persons, labour, services, right of establishment and residence reads that: The Partner States agree to adopt measures to achieve the free movement of persons, labour and services and to ensure the enjoyment of the right of establishment and residence of their citizens within the community.