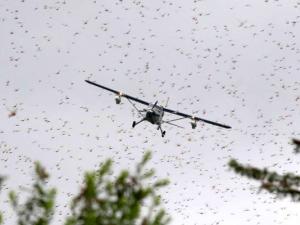 Uganda has added aerial spraying in its fight against the desert locust invasion after acquiring two aircraft.

Minister of State for Animal Husbandry, Bright Rwamirama, says two aircraft have been leased from Kenya at Ush3.6 billion ($974,104).

“Leasing of aerial spraying aircraft has been finalised,” he told journalists on Tuesday.

“The aircraft will be will be stationed in Moroto and Soroti for spraying across the affected districts towards Kenya.”

The government has deployed 2,000 soldiers to the region to lead the pushback.

Mr Rwamirama said of the Ush22 billion ($7 million) released for the locust response, some Ush11.1 billion has been used to pay subscription arrears to the Addis Ababa based Desert Locusts Control Organisation for East Africa (DLCO-EA), Ush3.6 billion ($974,104) on aircraft leasing, Ush300 million ($82,000) on military operations and Ush7 billion ($2 million) on procurement of chemicals, logistics, protective gear, pumps and surveillance.