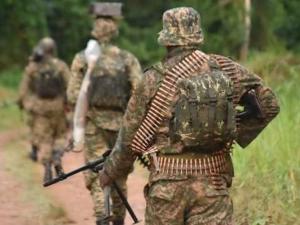 Uganda’s army leadership says it is running a tight ship of its operation against the Allied Democratic Forces (ADF) and claims it has “already degraded the enemy’s capacity” after it overran at least six camps of the rebel group in eastern DR Congo.

UPDF spokesperson Brig Flavia Byekwaso says the army incursion into eastern DRC has dislodged and scattered the ADF from their camps, but also killed 100 rebels, captured at least 43 and a further 61 surrendered.

Bases taken
The joint forces captured Kambi Ya Yua, described as the headquarters and main training base of the ADF, just before Christmas. Other bases taken are Belu I, Belu II, Mombasa, Kambi Erumu in North Kivu and Ituru provinces in eastern DR Congo.

The operation was first hampered by poor access to the vast territory, in addition to coordination issues.

“The beginning of this intervention was very slow and made difficult by problems of coordination between UPDF and FARDC. It took the FARDC until a few days to appoint an interim commander for the operation. It looks that they were themselves surprised when the first bombs landed,” says Pierre Boisselet, coordinator of Kivu Security Tracker.

“Given the terrain and the jungles, what we have done so far is already a success. In the first days it took us 11 hours to cover a distance of about four kilometres,” Brig Byekwaso said at the half point of “Operation Shujaa”, whose memorandum of understanding requires that it is reviewed after two months.

Despite claims that many rebels have been killed, captured or have surrendered, the UPDF has not paraded any insurgents, claiming that most of these are being held by the FARDC and that for security purposes the operation cannot parade them yet.

As the operation enters its second month, the army says the remaining ADF have fled to other camps, which are yet to be located.

“Intelligence and surveillance keeps discovering more camps, so yes [ADF] are hiding in those other camps,” said Brig Byekwaso.

On November 30, 2021, UPDF launched airstrikes from Ugandan territory, hitting targets inside the DRC, after which the military deployed ground troops to hunt down the rebel group that has in recent years become affiliated to the terrorism-linked Islamic State in Syria and Iraq.

IS-affiliated
The eastern DRC-based ADF became the Central Africa Province of the IS, which claimed responsibility for three bomb attacks in Kampala, including the deadly twin blasts of November 16 that killed four people and injured scores.

The 2013 final report by the UN Group of Experts on the DRC, which cites Ugandan officials and UN sources, said the ADF had an estimated strength of 1,200 to 1,500 armed fighters located in north-east Beni territory of North Kivu Province, close to the border with Uganda.

They estimated ADF’s total membership — including women and children — to be between 1,600 and 2,500.

Due to military offensive by FARDC and the UN peacekeeping operation in 2013 and 2014, ADF dispersed its fighters to numerous smaller bases, and moved women and children to areas west of Beni, and along the Ituri-North Kivu border.

The Congo Research Group estimated that the rebel outfit had 200 to 300 fighters in 2016 as the size fluctuated in response to military pressure.

Some accounts say the size of the ADF has fluctuated significantly over time, often declining in response to military pressures.