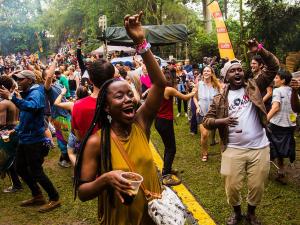 He also asked authorities to stage vigilance exercise at the popular cultural event to ensure organisers abide by the laid down rules.
“The Uganda Police Force (UPF) shall work closely with the organisers to enforce the guidelines at all times. Breaches will attract sanctions including prosecution. In case of serious breaches, UPF shall stop the festival and order everyone to vacate the Nyege Nyege site.”

Earlier on, Ugandan MPs and Prime Minister had clashed over the happening of this annual event with lawmakers arguing the festival was a breeding ground of sexual immorality.

However, Robinah Nabbanja, the Prime Minister, unbanned the festival.
The festival will be held between September 15-18, 2022.
As per the organizers, the annual event aims at celebrating music in Africa and other parts of the world, and is built on love, resilience and passion for music.
https://nairobinews.nation.africa/uganda-bans-orgies-nudity-at-nyege-nye...