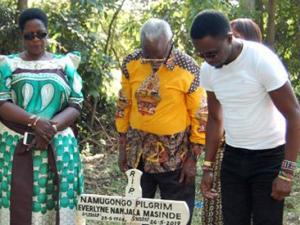 The Ugandan government has given Ksh54,000 ($540) to each of the four families of four Catholic pilgrims who died in a freak accident last May along Iganga-Jinja highway.

The four were killed after a matatu that was heading to Busia from Kampala lost control and rammed into them as they were walking to Namugongo Shrine in Uganda to attend the annual Ugandan Martyrs Day.

Two of them died on the spot, while the other two died while receiving treatment at Iganga Hospital. Several other people were injured.

The four Kenyans were among 150 Kenyan Catholic pilgrims walking to the Shrine.

Ugandan High Commissioner to Kenya Phibby Otala said that seven other Kenyan pilgrims who were injured in the accident will receive Ksh27,000 ($270) each.

Ms Otala met the families last weekend. The details of the payment were not revealed then.

“We know even if millions of cash is given it can’t bring back the lives that were lost. All we ask everyone is to pray for the affected families that they may have strength to live on,” she said.

Two of the victims were from Kisoko parish in Busia County and two were from Naitiri parish in Bungoma County, both in western Kenya.

Ms Otala said that the Uganda government was deeply saddened by the brutal deaths. She added that President Yoweri Museveni sent condolences to the victims’ families.

Kenya’s Foreign Affairs Chief Administrative Secretary (CAS) Ababu Namwamba thanked the Ugandan government for condoling with the families. He said this would encourage a good rapport between the two countries.