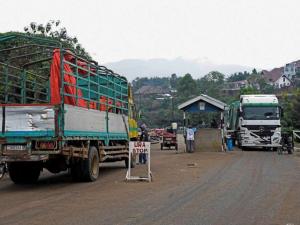 If the road to hell is paved with good intentions, that to lasting peace with neighbours is layered with bitumen and straddled by high-voltage electricity lines.

That appears to be the lesson from the Uganda government's strategic shift in its regional policy towards the Democratic Republic of Congo, its large, rich, but a troubled westerly neighbour.

After two-and-a-half decades of testy relations, including an armed invasion in 1997 that contributed to one of the world's deadliest conflicts since World War II, Uganda is betting that infrastructure investments and shared economic benefits will build better relations and long-term stability.

Uganda's cabinet recently approved plans to build three roads inside the DRC, continuing the country's recent strategy of growing its influence in the Great Lakes region riding on infrastructure diplomacy.

Jointly funded by the two countries, the roads will run from some of Uganda's border towns into DRC: one will run from Kasindi to Beni (80km) and another will integrate the Beni-Butebo axis (54km). The third will stretch for 89 kilometres from the border town of Bunagana, through Rutshuru to the strategic city of Goma, the capital of the North Kivu Province in DRC.

Uganda's Works and Transport Minister, Gen Edward Katumba Wamala told The EastAfrican that while details remain unclear, the project has been approved in principle. "What has been approved by the Cabinet is the concept," he said. "Both governments will contribute to the funding with DRC taking the biggest part and Uganda will make a contribution," he said.

He added that Kinshasa will have to approve the projects and sign a memorandum of understanding.

The Cabinet approval followed the Uganda-DRC Business Forum in November 2019 in Kampala, which included a bilateral meeting between Presidents Felix Tshisekedi and Yoweri Museveni at State House, Entebbe.

The two presidents, together with Presidents Paul Kagame of Rwanda and João Lourenço of Angola, also participated in a teleconference on October 7 which discussed regional security and collaboration.

Last week Uganda's Finance Minister Matia Kasaija presented a supplementary budget request to Parliament for the construction of the roads. From the request, Uganda is expected to contribute $65.9 million out of the total bill of $334.3m but officials say it is a small investment for a project with economic, political and strategic importance.

Economically, the road will double trade volumes between the two countries in the short term, according to Gen Wamala, the Transport minister. In 2018, Uganda exported goods to DR Congo worth $532 million, including an estimated $312 million in informal exports.

Trade across the border has however been hampered by a poor road network inside DRC which Ugandan traders say increases the cost of doing business. Insecurity in the region has also been a hindrance to smooth cross border trade between the two countries. The road is thus expected to speed up trade and increase transparency in the cross-border flows of goods. 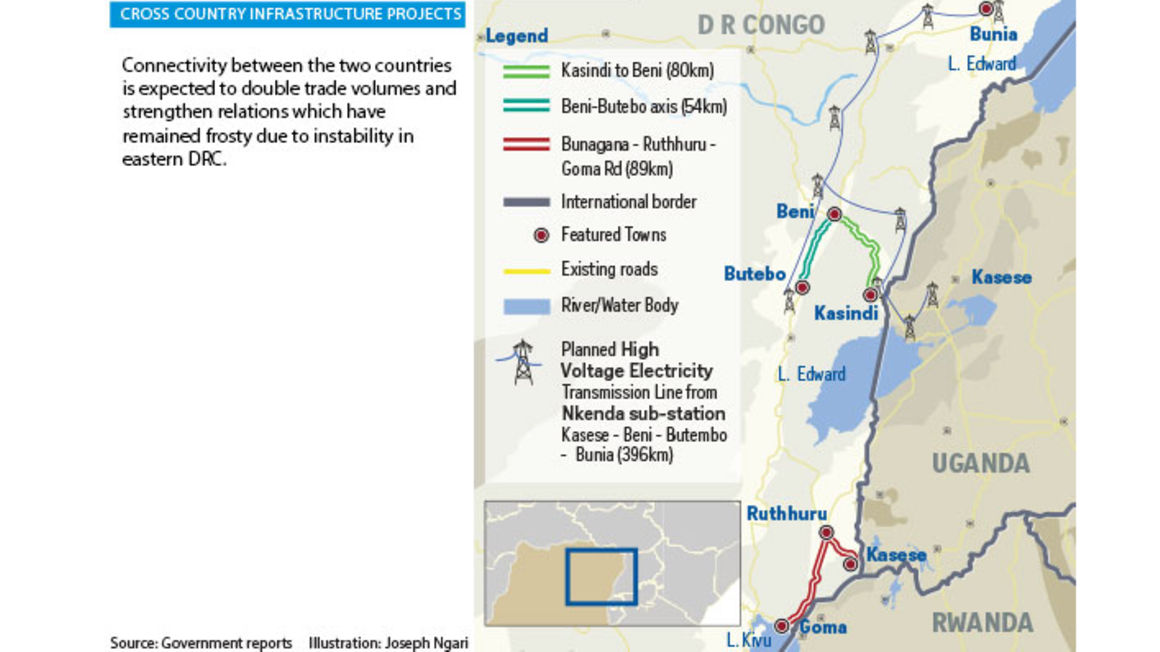 Politically, Uganda is banking on infrastructure to strengthen relations which thawed somewhat under former president Joseph Kabila but remained frosty due to instability in eastern DRC and a $10 billion bill imposed on Kampala in 2005 by the International Court of Justice.

The ongoing rapprochement has been helped by a new outward-looking regional policy from Kinshasa under President Tshisekedi. Since taking office last January, the new Congolese leader has visited all nine countries with contiguous borders in a clear change of approach from his more introverted predecessor.

Five of those neighbouring countries are in the East African Community and last year President Tshisekedi wrote to the seeking to have his country admitted to the regional bloc, a decision that is under review. The new leader has openly spoken of Congo's new foreign policy objectives.

"We are committed to change," President Tshisekedi said recently.

"We are discussing economic integration, peace between our peoples and at our borders," he added.

DRC's pivot from a primarily francophone central African locus to the mainly anglophone eastern Africa has not gone unnoticed by state and non-state actors in Kampala or in other capitals in the region. In August, the Nairobi Securities Exchange-listed Equity Group Holdings Plc completed the acquisition of a majority stake in Congolese lender Banque Commerciale Du Congo.

The pivot east started during the Kabila administration when, in 2007, DRC and Uganda agreed to pursue joint oil and gas exploration activities near their common border, before similar agreements with Tanzania in 2016 and Rwanda in 2017. The tentative steps have turned into a goose march east under President Tshisekedi.

In March 2019 Rwanda and DRC signed an air transport agreement opening up their respective airspaces to Congo Airways and Rwandair, allowing the latter to launch flights to and open an office in Kinshasa.

Earlier this month, after a special envoy from Kinshasa visited Bujumbura, the DRC and Burundi agreed to "regulate and increase cross-border trade in the best interest of the economies of the two countries" and to jointly fight against "negative forces and other armed groups destabilising our two countries, in particular by organising coordinated patrols on both sides of the common borders," according to a communique issued after the visit.

However, coming 18 months after Rwanda closed its border with Uganda and with it a major trade artery into the heart of the continent, DRC's overtures present a strategic work-around for Uganda's geo-political planners. The road to Goma, in particular, while longer that the existing route through Rwanda, would provide an alternative ingress into the lucrative Congo market.

With its population of 84 million, the DRC is already one of Uganda's biggest trading partners in the region and Kampala is keen to build even stronger ties to replace other shrunken regional export markets, including South Sudan which remains politically and economically volatile.

Apart from the road projects, Uganda is dusting off plans from 2013 to build a 396-kilometre high voltage electricity transmission line from Nkenda sub-station in Kasese near the border, to Beni, Butembo and Bunia towns all in DRC.

Uganda's infrastructure diplomacy in Congo is not new. The country has built or contributed to building roads in Kenya and in South Sudan, schools in Tanzania and Rwanda, and has made the crude-oil export pipeline through Tanzania a major tool of cooperation with Dar es Salaam. Plans to build a standard gauge railway to extend a similar line from Naivasha in Kenya to Uganda and the border with Rwanda have since stalled on weak underlying economic fundamentals.

The east of DRC, which borders Uganda, Rwanda and Burundi, has long been a hotspot for insecurity with various militia including the Allied Democratic Forces, the Democratic Forces for the Liberation of Rwanda (FDLR), and Movement 23. It is also a perennial source of refugees, with the UNHCR reporting that more than 3,000 have crossed from Congo to Uganda since July, raising to 360,000 the number of Congolese who have sought sanctuary in the neighbouring country.

After years of unsuccessfully waging war to bring peace to the region, the two governments are hoping that trade and good roads can finally deliver the goods.