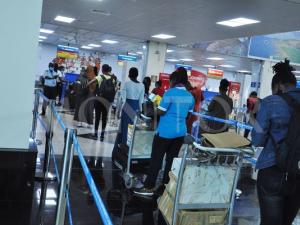 Uganda has dropped the mandatory requirement for Covid-19 testing at its main entry point in Entebbe.

The announcement, on Wednesday, follows a Monday Cabinet decision that noted that few new cases were being recorded at the airport and that the threat of new coronavirus variants and community transmissions has reduced.

"Mandatory Covid-19 testing of all incoming travellers at Entebbe International Airport upon arrival has been stopped with effect from 16 February 2022," said Dr Henry Mwebesa, the director of health services at the Ministry of Health, in a statement.

Uganda has, however, maintained the requirement for travellers to be tested 72 hours before arrival or departure from the airport.

"Our health workers will continue to screen all travellers both at arrival and departure and verify their Covid-19 test certificates," said Dr Mwebesa.

The government imposed the restrictions in September last year following the detection of more variants of Omicron imported from neighbouring countries in travellers who arrived via the airport.

Previously, arrivals were only required to show a valid negative PCR certificate obtained from an accredited lab in their countries of origin.

While talking to local media on Wednesday afternoon, Works Minister Gen Katumba Wamala confirmed the suspension of Covid testing, saying it would apply to all points of entry.

Travellers paid $30 for the tests even if they possessed negative PCR results from their departure points.

The measures had brought business to a standstill at Malaba and Busia along the Kenya border with Uganda as truck drivers protested the mandatory tests and costs. The strike led to a fuel shortage in the landlocked country, forcing the government to cut the cost to $25 and eventually suspend testing for truck drivers only.