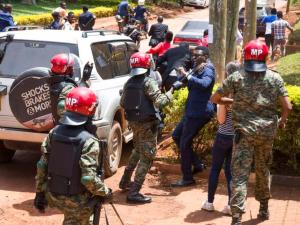 Six citizens from Uganda, Kenya and Tanzania have file a petition at the East African Court of Justice challenging the conduct of the January 2021 presidential election in Uganda.

The petition filed earlier this month, also asks the court to end the widespread violence and human rights abuses that erupted before the election, and some of which continue.

The lead petitioner Dr Lina Zedriga Waru Abuku, is a Ugandan citizen, human rights activist, and secretary of the Uganda National Committee for the Prevention and Punishment of the Crime of Genocide, War Crimes, Crimes against Humanity and All Forms of Discrimination. She is also a deputy chairperson of the National Unity Platform whose candidate in the election, Robert Kyagulanyi aka Bobi Wine, claims he won the election. The Uganda Electoral Commission declared President Museveni winner with 58 per cent of the vote. In power since 1986, he is expected to be sworn-in in May.

The other applicants are Arthur Larok and Andrew Karamagi, who are both Ugandan citizens and rights activists. Others are Deus Valentine Rweyemanu, a Tanzanian human rights activist, Kenyan rights and anti-corruption activist John Githongo and Hon Abubakr Zein Abubakr, a former member of the East African Legislative Assembly representing Kenya.

The applicants want the regional court to declare that the conduct and outcome of the presidential election were unlawful due to the “massive violence and criminality” that marred it. They also want the court to order an end to rights abuses of opposition supporters allegedly orchestrated by Ugandan police, military and special forces command, and declare that the East African Community should have done more to ensure a free, fair and credible election in the country.

“We expect justice. I think for me this case is going to be a test to that court,” Mr Job Kijja, the convener of the applicants, said.

“We have taken some cases there but even though we didn’t get the results we wanted, we thought we could go back instead of the Ugandan courts that are influenced by the regime,” he said.

At least 54 Ugandans were shot dead in November in election-related violence and hundreds of opposition supporters remain in detention after a wave of arrests, kidnaps and forced disappearances. Social media and the internet were also shut down before election day, reducing the transparency of the process.

No one has been held responsible for the killings, despite media investigations showing that many of the victims were not involved in the protests that sparked the lethal response by the military.

Mr Kyagulanyi petitioned the Supreme Court in Uganda to annul the election result but withdrew his case after the court refused to allow him to present new evidence of electoral irregularities. Chief Justice Owiny Dollo also refused to recuse himself from hearing the case after his impartiality was questioned.

Mr Dollo had previously represented President Museveni as one of his defence lawyers in a presidential election petition challenging an earlier disputed win. Security operatives have arrested hundreds of suspected opposition supporters and sympathisers, often from their homes in the dead of night detained them in ungazetted places beyond the constitutional 48 hours and without access to family and lawyers.

Several opposition supporters have been charged in military courts for possessing red berets, a symbol of the NUP party, but which is also similar to the outfit of the Military Police.

The case lists several top officials and agencies in Uganda that the applicants claim contributed to making the election a blatant farce. The institutions include the Uganda Communications Commission, which regulates the internet industry, and Uganda Broadcasting Corporation, the public broadcaster, which the Supreme Court has previously accused of not giving balanced coverage to all candidates.

Judith Nabakooba, the country’s Information and Communications Technology Minister, said she couldn’t comment on the matter because she wasn’t privy to the details of the case.

On March 12, the East Africa Law Society (EALS), filed a case at this same court challenging the Ugandan Government over its shutting down of the internet and mobile money, and blocking of social media platforms and virtual private networks.