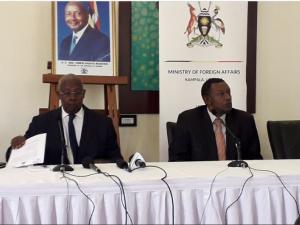 Uganda on Wednesday officially handed over 9 Rwandans who were detained in Uganda, including the 7 who were set free by the court martial on Tuesday in what has been described as a positive step in the normalisation of relations between the two countries.

Rwanda however says that while the development is welcome, the number is very small compared to the number of Rwandans detained in Uganda.

Uganda’s Foreign Affairs Minister Sam Kutesa on Wednesday, in a press conference where the 9 were paraded, said that Uganda withdrew the charges on the 9 as a sign of goodwill in line with the implementation of the Angola Memorandum of Understanding (MoU).

The press conference at Uganda Media Centre which was attended by Rwanda’s High Commissioner to Uganda Maj. Gen Frank Mugambage and President Yoweri Museveni’s special envoy Amb. Adonia Ayebara, Minister Kutesa said that it is an act of goodwill which Rwanda should reciprocate.

“Let me set the record straight. We have withdrawn charges. These people were not arbitrary arrested. It was an act of goodwill and we hope it will be reciprocated,” Kutesa said, adding that it is the first step in addressing grievances between the two countries which have led to tensions.

The Minister of State for Foreign Affairs in charge of East African Community Amb. Olivier Nduhungirehe however told KT Press that there is nothing to reciprocate since Rwanda has not illegally detained Ugandans.

He however welcome the release of the 9, who included Rene Rutagungira, a Rwandan businessman who was among the first Rwandans to be detained in Uganda on allegations of espionage. Rwanda denies the claims.

Rutagungira’s case was of particular interest to President Paul Kagame and he is the only one whose name Kagame has mentioned in public among all those Rwandans arrested and deported.

At at the annual government retreat in March last year Kagame spoke about Rutagungira.

Kagame said the genesis of Rutagungira’s troubles begun after he refused advances by Rwanda National Congress (RNC) operatives in Uganda to join them. “When he refused, they said that they will not allow anybody to live in peace in Uganda unless they join RNC,” said Kagame.

“I spoke to President Museveni about Rene, he is still in prison,” said Kagame at the retreat, who indicated that all the people whom RNC has contacted and have refused joining them, are targeted.

Rutagungira is former soldier, and had been living in Uganda doing his own businesses. Uganda alleges he and other Ugandan police officers connived to kidnap Rwandan “refugees” in Uganda and sending them to Rwanda. One particular case is that of Lt Joel Mutabazi, an Israeli-trained commando currently in jail in Rwanda.

“The just concluded handover of nine (9) #Rwanda-n citizens who were arbitrary arrested and illegally detained in #Uganda is indeed a step in the right direction. However, nine is not all. Hundreds of our compatriots in the same situation in Uganda must be released. #LuandaMoU” Minister Nduhungirehe tweeted.

Ambassador Mugambage during the press conference noted that the release of the 9 who were handed over the Rwandan mission in Kampala and immigration authorities for transfer to Rwanda is a step in the right direction but called for the end to arbitrary arrests.

The seven who were released by the court martial is include Rutagungira, Emmanuel Rwamucyo, Augustin Rutayisire, Etienne Nsanzabahizi, Bahati Mugenga, Charles Byaruhanga and Claude Iyakaremye. The identities of the other two have not been revealed.

They were facing several charges including espionage, kidnap and illegal possession of firearms among other accusations which Rwanda has vehemently dismissed over the last 3 years.

Kigali however says the latest developments which follow a message from President Yoweri Museveni’s message to President Paul Kagame last month and a New Year declaration to work on normalising ties with Rwanda is positive.

Amb. Nduhungirehe said that if those two key issues are addressed, relations between the two countries can go back to normal before the end of the year.

“We hope that President Museveni will follow through on his promise and New Year commitment,” Nduhungirehe told KT Press on Tuesday, adding that Rwanda hopes all Rwandans will be released and support to armed groups stopped.

About 1, 430 Rwandans have been unceremoniously deported from Uganda, dumped across the border and deprived of their properties and money.