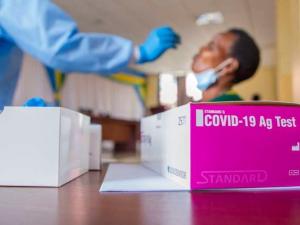 Dozens of Ugandan legislators and their staff have tested positive for Covid-19 after participating in a regional tournament in Tanzania, a parliamentary spokesman said Tuesday, as fears grow over the Omicron variant.

About 50 MPs and staff tested positive for Covid-19, parliament spokesman Chris Obore said on Twitter, adding that no one was hospitalised.

The tournament drew nearly 1,500 participants from the six-nation East African Community bloc, even as some member countries such as Kenya confront a surge in infections, with one in four tests turning up positive.

The legislators faced off against each other in the two-week tournament in Arusha, playing various sports including tug-of-war.

"The games were interactive in nature, therefore the players could not strictly observe standard operating procedures," Obore said on Twitter, adding that "in Tanzania, the population doesn't wear masks."

Since it was first reported in South Africa in November, the Omicron variant has been identified in dozens of countries, prompting many to reimpose restrictions, including on sporting events.

Despite indications that Omicron is considerably less severe than the Delta variant, early data suggest that it is more contagious and may have higher resistance to vaccines.

Uganda, which has recorded 25 cases of the variant according to official figures, has seen its positivity rate jump nearly sixfold since the start of December.

Ugandan schools are scheduled to reopen on January 10 for the first time in nearly two years.

Tanzania began inoculating its population only in July, after the country's new president Samia Suluhu Hassan overturned the policies of her Covid-sceptic predecessor John Magufuli, who shunned vaccines in favour of the healing power of prayer.