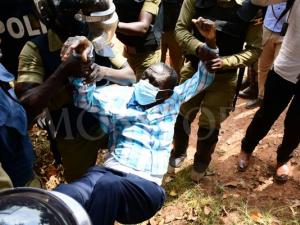 Uganda police have arrested political activist and former presidential contender Kizza Besigye as he attempted to leave his home in Kasangati, Wakiso District.

He is currently detained in a police van, which had been parked near his homestead. The veteran politician was heading to Kasangati town to protest against the high commodity prices.

"I will not accept to be kept in my house like I am a prisoner in my own country. This must stop," Dr Beisgye said.

The police did not give any reason for his arrest on Monday. Since early this month, Dr Besigye renewed his criticism of President Yoweri Museveni’s government for doing nothing to cushion vulnerable Ugandans against the skyrocketing prices of essential commodities.

His arrest comes just hours after President Museveni delivered a televised national address in which he said the government will not intervene through subsidies and removing import taxes because doing so would collapse the economy.

"Just turn and go back to your house," the commanding officer on the ground who did not reveal his name said before ordering the officers to arrest an unrelenting Besigye.

The new drive is designed as a replica of his famous 2011 Walk-to-Work protests that came at the backdrop of the general election. The 2011 protests against the harsh economic situation occasioned by the wild election expenditure spread across many parts of the country although they were brutally suppressed by both the military and police, leaving five dead, scores injured and hundreds languishing in prisons.