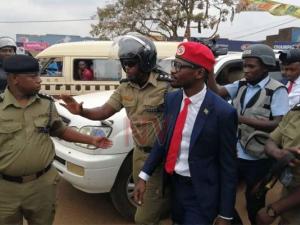 The Monday arrest was effected as police fired teargas and live bullets to disrupt a consultative meeting that was organised by Wine, who is the Kyadondo East MP.

Wine and his team have been detained at Kasangati Police Station.

The meeting by the opposition leader was scheduled to take place at Our Lady of Good Counsel Secondary School, Gayaza in Kyadondo East.

The Gayaza meeting was part of Wine’s nationwide consultation phase in which he intends to inform the electorate about his manifesto ahead of the 2021 general elections.

Riot police officers blocked people from accessing the venue of the meeting.

Kasangati Mayor Tony Sempebwa Kiyimba said he was disappointed that police could block a lawful meeting.

On Friday, Wine said that the Presidential Elections Act gives him legroom as an aspiring presidential candidate to move across the country to consult the people on whether they would support his candidature ahead of the 2021 elections.

“Section 3 of the Presidential Elections Act provides that anyone who aspires to become president can write to the EC (Electoral Commission) and thereafter go around the country consulting citizens about his or her intentions. So, in light of this, I am going to interact with Ugandans about my intentions to run for president,” Wine said in a message.

Uganda’s police spokesman Fred Enanga said they had received the letter from Wine and that they will be checking it to see if he had fulfilled the requirements of the Public Order Management Act.

“He is supposed to notify the area LC1, police and the authorities then when the meeting is taking place we go and assess whether the requirements are in place,” Mr Enanga said.