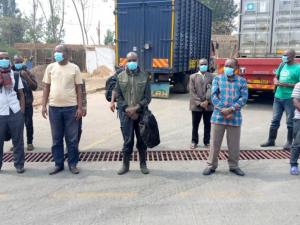 Ugandan authorities have released another group of 12 Rwandans, from Ugandan prisons as part of efforts to mend relations between the two countries, the Rwanda Broadcasting Agency announced Tuesday, July 7.

The released Rwandans were handed over Rwanda Immigration authorities at Kagitumba Border in Nyagatare District this Tuesday morning.

Early last month, Uganda also released 130 Rwandans from various detention facilities where they were held for varying periods of time and handed them over to Rwanda.

They were released in two groups; one group came through Kagitumba border while the other came through Cyanika.

That came after Uganda government officials promised to set them free during a virtual meeting with their Rwandan counterparts a week earlier.

On June 4, senior Rwandan and Ugandan officials held a video conference as part of both countries' continuing effort to work on normalising relations between both countries.

This was the fourth Ad Hoc Commission meeting.

In the meeting, the Rwandan delegation was led by foreign affairs minister Vincent Biruta while the Ugandan side was led by Sam Kutesa, the Ugandan foreign minister.

It was also attended by Tete Antonio, Minister of External Relations of Angola, and Gilbert Kankonde Malamba, DR Congo's Deputy Prime Minister, and Minister of Interior, Security and Customary Affairs.

Angola and DR Congo are facilitators in the ongoing process to normalize the relations between Rwanda and Uganda.

The process was kick-started by a Memorandum of Understanding signed between both countries in the Angolan capital Luanda in September last year.

But at the time, Kutesa also said that 310 other Rwandans who he said committed “capital offences” would remain in custody and their details will be shared with Rwanda.

It is not yet clear whether these newly released 12 Rwandans were part of those who allegedly committed capital offenses or not.