Uganda to reopen schools in January, after almost two years 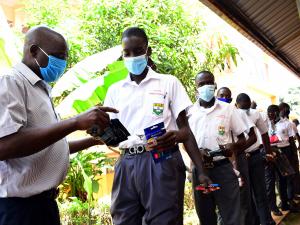 Ugandan schools, closed since March last year owing to the pandemic, will reopen in January regardless of currently low vaccination uptake, the country's president said on Thursday.

"Vaccination is key to the reopening of the economy," he said, even though fewer than three million jabs have been doled out for a population of roughly 45 million.

Ugandans have shown reticence to get jabbed so far despite Museveni stating that "right now 4.7 million vaccines" are available with a further 23 million doses expected by the end of the year.

"By the end of December 2021, 12 million people should have been vaccinated," forecast the head of state, including vulnerable people and health and education workers.

Museveni urged Ugandans to "walk to the health centres or be carried there... go by motorcycle taxi, go by bicycle or go by vehicle and be immunised".

"Even if you don’t come out for vaccination, we will open the schools and the economy," he said.

"If anything goes wrong, the moral responsibility is yours."

Museveni last month lifted the bulk of Covid-related restrictions in the country, which has seen just over 3,000 deaths from the virus, but he left schools shuttered.

With their careers on hold, many teachers have switched to other jobs to help provide for their families.

Some have said they do not intend to return to the classroom amid doubts they would be able to make a living with many schools heavily in debt. Several institutions have converted to hotels or restaurants.