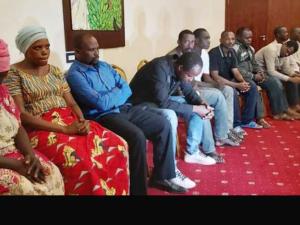 The development comes four days after the third meeting of the Ad Hoc Commission on the implementation of the Luanda Memorandum of Understanding between Uganda and Rwanda held in Kigali and ahead of Friday’s talks between the two countries’ presidents facilitated by Angola and Congolese leaders.

Last Friday’s meeting in Kigali was a follow-up on the Luanda MoU signed by both countries in August last year.

President Paul Kagame and his Ugandan counterpart Yoweri Museveni will be meeting under the Quadripartite Heads of State Summit, which also includes the leaders of Angola and DR Congo and seeks to normalise ties between Kigali and Kampala.

The meeting will take place at the Gatuna border crossing between the two countries.

Also expected at the summit are Angolan President João Lourenço, and Félix Tshisekedi of DR Congo – who have been facilitating talks between the two neighbours since mid-last year.

Three such summits have been held since the signing of the Luanda MoU in August 2019, the latest of which took place in February. This will be the first time the leaders meet under the Luanda framework outside of Angola.

The last summit resolved that Uganda and Rwanda would release nationals of each other.

The two countries were urged to “protect and respect the rights and freedoms of nationals of the other party residing or transiting in their national territory, and to refrain from engaging in actions that destabilize the other party (or actions perceived to) such as financing, training and infiltration of destabilizing forces.”

Rwanda has provided evidence pinning Uganda on efforts by armed negative groups to destabilise the former, and denounced arbitrarily arrests and detention, and torture of hundreds of its citizens in Uganda.

Last week’s meeting of the Ad Hoc Commission on the implementation of the Luanda MoU between Uganda and Rwanda in Kigali ended as with both parties committing to further verify the number and status of nationals detained in each other’s country and to report back through a note verbale in three weeks’ time.

They also committed to protect and respect the human rights of nationals of either party in observance of the rule of law and international humanitarian law and by ensuring due process.

The two countries also committed to finalising an extradition treaty with view to have it signed at the next Heads of State Summit on Friday.

It was also agreed that the Government of Rwanda would formally write to the Government of Uganda by February 15, notifying the latter about some specific issues related to destabilising activities carried out by Rwandan rebel groups from Ugandan territory.

The Ugandan delegation agreed that their government would undertake to verify and respond, by February 20, to some of the most pressing issues capable of immediately being addressed and further investigate and respond to the other issues.

Subject to the fulfilment of all these undertakings, the Ad Hoc commission, would recommend to the Quadripartite Summit to consider the issue of normalisation of the activities and mobility of people and goods across the common borders between the two countries, according to a joint communiqué released after the meting.

Kigali issued a travel advisory to Uganda early last year warning that it could not guarantee their safety in the neighbouring country.