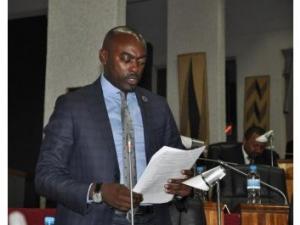 A Ugandan Member of the East African Legislative Assembly has come out and strongly condemned the way Ugandan army and Military intelligence are handling Rwandans who they falsely accuse of espionage.

During a press conference in Kampala, Fred Mukasa Mbidde, who is also the DP Vice President, condemned what he called “inhumane incarceration of innocent Rwandan nationals as retribution for Kigali’s deeds.”

He advised security institutions to have utmost respect for human rights in the course of handling criminal suspects and advised Uganda People’s Defence Force [UPDF] to cease targeting citizens of the East African community, particularly the Rwandan nationals which is against known protocols on human rights including the treaty for the establishment of the East African Community.

Mbidde said the party was aware of at least 13 Rwandan nationals who are languishing in various detention centers across the country.

The detained Rwandans listed by Mbidde include Rene Rutagungira, who was arrested from a bar in Kampala in August 2017, Emmanuel Rwamucyo and Peter Augustin Rutayisire who were arrested last year for alleged espionage.

Mbidde went on to call on the Ugandan government, to iron out its differences with Kigali, whose effects he said could be catastrophic to the regional integration process.

“It is therefore demanded that government explains the general relationship between Rwanda and Uganda in very certain terms. The prisoners, all civilians are released from the court martial and if suspected of offences be charged in civil courts with a possibility of obtaining bail to look after their families”, he is quoted by a Ugandan online media, Chimpreports.