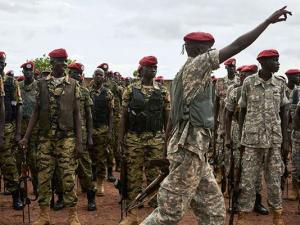 The Ugandan military on Monday said that its troops killed three of the South Sudan soldiers who crossed into the country in the border district of Yumbe.

"We had earlier received information concerning these South Sudanese soldiers who enter Uganda in civilian clothes and steal from our people," Ndifula said.

"On Saturday, there was exchange of gunfire between our soldiers and the South Sudanese gunmen in the border district of Yumbe. They were about seven of them but we managed to put out of action three. Our soldiers were not hurt," he added.

According to Ndifula, the attackers had moved about 1.5km into the Ugandan territory.

"Yesterday [Sunday] we had a peaceful meeting with our counterparts from South Sudan. We handed over the bodies of the deceased to them. We agreed that the seven soldiers had entered Uganda illegally because there was no prior communication from the authorities across the border," he said.The teams agreed to sensitise their soldiers against illegal crossing of the common border and to always communicate in case of any operations.