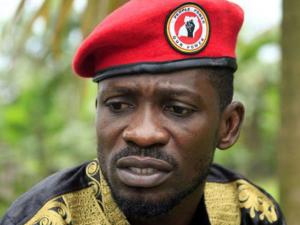 Ugandan politician and presidential candidate Bobi Wine was on Tuesday arrested by the police.

This comes after he was cleared to run for the country's top seat by the electoral commission.

The Kyadondo East MP, real name Robert Kyagulanyi, announced Tuesday that he’s contesting for the highest office in Uganda so as to represent the oppressed, the weak, the poor and the downtrodden, among others.

“I take this moment to announce that what we are witnessing now is the launch of a critical phase in our struggle to liberate our country from a dictatorship that has crippled us for close to four decades. We have closed the book of Lamentation.

“We have now opened the book of Acts. I’m here to save President Museveni from himself; from his corruption and patronage, among others. Fellow Ugandans, I present myself as a servant, not a boss. We are going to run a people-centered government,” he said in a statement.

“I am representing those who have been excluded from a system which works only for a few who, of course, are sitting and stepping on the necks of the many. We will focus on science and technology as a catalyst of development. Each sub-region will have innovation hubs. We are first class brains stuck in a third world country,” added the 38-year-old pop star.

The MP was arrested after handing in his nomination papers to the election body, the spokesman of his National Unity Platform (NUP) party confirmed.

"Right after nomination, Bobi Wine was violently arrested outside nomination venue! He's been brutalised by police and military. They've blocked him from proceeding to launch his manifesto at office. It's clear Museveni & his regime are in so much panic," a post sent via his official Twitter handle today said.

The presidential election is set to be held on February 18, 2021.

Meanwhile, incumbent President Yoweri Museveni was also cleared by the polls body to run for a sixth term, paving way for the 76-year-old to vie on the ruling National Resistance Movement (NRM) ticket.