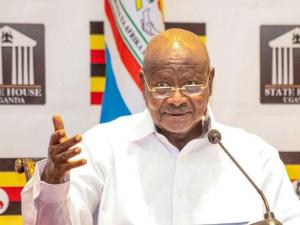 The country recorded its highest single-day infections of 308 last Saturday.

On Thursday, the Ministry of Health reported 155 people had tested positive, minutes before Mr Museveni announced a public holiday calling on Ugandans to pray "for God to deliver" the country from the pandemic.

On his official Twitter handle, Mr Museveni said he arrived at the decision after an unnamed individual approached him with a vision from God with instructions that he organises national prayers.

“A certain Ugandan came to me and told me that God had told him in a vision that I should organise national prayers, scientifically organised, for God to deliver us from Covid-19,” Mr Museveni said.

“Therefore, by the powers given to the President of Uganda by Section 2(2) of the Public Holidays Act, I declare the 29th of August 2020, a day of National Prayers and a Public Holiday. Stay in your houses or compounds and pray,” he added.

Uganda has cumulative confirmed coronavirus cases of 2,679 as at Thursday with two deaths bringing the total of fatalities to 28.

Those who have recovered are 1,268, according to the Health ministry.