Uganda’s obsession with Gatuna border; entitlement at the root of crisis 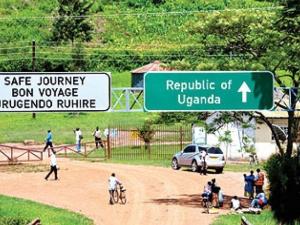 Most Rwandans who have been following the Uganda-Rwanda crisis ask themselves why Ugandans appear to have zeroed in on the border so much to the exclusion of the concerns of Rwandans and to have numbed themselves to the suffering of our loved ones who remain incarcerated – and tortured – without trial in Uganda. Does this mean that Ugandans lack empathy for Rwandans? If so, why do they refer to Rwandans as “our brothers and sisters?”

The issue is one of an entitlement mentality. An entitlement mentality is defined as a state of mind in which an individual believes that privileges are rights that must be granted as a matter of course. Such a mentality is usually characterized by: Lack of appreciation for others’ rights and sacrifices; lack of personal responsibility; inability to accept that actions have consequences; and arrogantly assuming that privilege reflects merit. Once a feeling of entitlement takes over, other rational considerations are tossed out of the window. Even the reasonable expectations of brotherliness and sisterliness is lost to the sentiment of entitlement. Rather than engage such considerations and expectations, one is likely to throw tantrums and a fit when they feel they aren’t getting what they are entitled to.

And so, the general indifference of Ugandans to the suffering of Rwandans in Uganda characterized by their single-minded focus on opening the Gatuna border is due to some Ugandans feeling entitled to unlimited and unconditional access to Rwanda in general and to the Gatuna border in particular. This sense of entitlement trumps any Rwandan concerns, which Ugandans will continue to mute-out, as long as the Gatuna border remains closed.

It doesn’t matter to Ugandans that almost one year to date, on 12 November 2018, Julienne Kayirere was, together with her infant baby Joanna Imanirakiza, were snatched from the premises of her small business in Mubende by Ugandan authorities for allegedly being in the country illegally. The mother was separated from her infant daughter, detained and systematically tortured. About a year later, she was dumped at the border without her child whom the authorities told her they didn’t know what had happened to her.

It won’t matter that a pregnant Jermaine Niyonkuru, 19, had to spend a year and a half in prison after being picked up by the authorities on 20 February 2018, after she had gone to Uganda to visit her fiancé. She was intercepted at a roadblock in Kisoro and asked to present her documentation only for the police to declare her under arrest for “illegal entry”. She would eventually be released and dumped at the border in June 2019 after 16 months of incarceration without any form of process whatsoever. Her baby was born while she was under lock.

In May 2019, Laurencia Mukagatare, 50, of Nyagatare was pleading with the authorities in Rwanda to intervene on her behalf. In September 2018, her only child Maniriho, 18, was abducted in Rwempasha, Uganda, where he had gone to visit, by “Ugandan soldiers in a patrol car.” The only information she could gather about her son was that he was “whisked away by soldiers in a patrol car,” she said. “I live with unbearable sorrow, he was my only child,” she narrated her pain.

Darius Kayobera and his wife Claudine were picked up at midnight in January 2019 at their beauty salon business in Rubaga, Kampala. At home their three young children aged 9, 6, and 3 years of age, were left unattended and had to cater for themselves in the absence of their parents who still languish in jail.

Silas Hategekimana, 43, was detained in May 2019 by Ugandan authorities and tortured while in detention before he was dumped at the border in June 2019. Soon, in August 2019, he succumbed to severe injuries from the torture he endured in Ugandan custody. In December 2017, Nunu Johnson was picked up from his home in Ntungamo detained, tortured, and denied access to liver cancer and diabetes medication. He died shortly in August 2018. “It is CMI that killed him,” a broken relative narrated.

There are those who remain psychologically traumatized from the torture endured in CMI custody; others are physically incapacitated for life as a result of such torture. Fidele Gatsinzi almost succumbed to such torture which has condemned him to life in a wheel-chair. Recalling his captors’ brutality, he says, “I could not wait to die.”

Others like Patrick Niyigena, 38, who was detained in Kampala in August 2018 and eventually dumped at the border almost a year after, in July 2019, continue to suffer from the effects of the unknown substances they were injected with. “Doctors still can’t determine what my captors injected me with,” an emaciated Niyigena says.

And yet, these are the lucky ones who got out alive and haven’t been disappeared.

Ordinarily, these would be horror stories to anyone, especially to those with whom there is “fraternal” affinity. And so, when such heartbreaking ordeals do not elicit that kind of reaction, let alone empathy, with Ugandans persist instead in clamoring for Rwanda to “open the border” (which is actually not closed) then it must be because Ugandans think those Rwandan victims of the Ugandan government’s systematic ill-treatment had it coming, especially if their country had the temerity to close its border. That kind of mentality is however possible only if there is a degree of a feeling of entitlement for the border to be open for them; a right rather than a privilege.

This entitlement mentality has numbed the senses that activate empathy and has replaced it with a claim of (faux) brotherhood, bordering on blackmail. Such blackmail is on display in The Daily Monitor’s recent article titled “Will Uganda-Rwanda meeting diffuse border crisis?” that the paper published on 13 November 2019, in the lead-up to the second ad-hoc committee meeting (since suspended) to follow up on the Luanda MoU. “Since Rwanda closed the border, the kindred spirit that once prevailed among these communities was shattered,” emotional blackmail begins, “In the place of hope lies fear. Commerce that once thrived at the border has been disrupted. The bond that prevailed among closely-knit families that live on either side has also been tested.” Shortly after on 14 November, same paper, formerly Uganda’s remaining independent newspaper, followed up with another article titled, “Rwanda calls off second border closure meeting.” Monitor talk of a “friendly past” to is aimed at blackmailing Rwandans into accepting as normal their victimization by the Ugandan authorities.

Although Ugandans are generally known to be empathetic people, their sense of entitlement over Rwanda seems to circumvent and anaesthetize their empathies. Secondly, that entitlement mentality comes out sounding as lack of appreciation for Rwandans’ rights and is used to belittle Rwanda and Rwandans as undeserving of any consideration.

When an entitlement mentality goes this far, it leads to an unrestricted sense of false self-importance. In July 2019, Uganda’s Minister of Trade Amelia Kyambadde told Ugandan traders that Rwanda is a small market that they should “ignore.” She said that their attachment to their trade with Rwanda was “sentimental”, before doubling down on her rhetoric, “We are not going to confine ourselves to an economy of how many million, eight million?” she added. (Rwanda’s actual population is almost five million more than she stated). Clearly, the traders she was speaking to must have thought hers to be an irrational expectation that they could find a replacement market anywhere close to the over US$300m Rwandan market for Uganda’s product exports.

Kyambadde’s entitlement mentality to Rwanda’s market has her mistaking a purely commercial interest on the part of Uganda’s traders to a sentimental attachment, a favour that they extend to Rwanda. Indeed, that entitlement mentality drives her into deeper irrationality. “Of course, we have sentiments with Rwanda, but if you are doing business, you should forget about Rwanda. Let us look at other areas. And I keep telling Ugandans, let’s go to (the) DR Congo. Let us go to other neighbours. Those are emotions, business is money,” she added not realising her own bruised emotions that Ugandans’ entitlement to the Rwandan market was being thwarted by “those unreasonable Rwandans” who should feel grateful that Uganda would condescend to trade with them. Kyambadde’s attitude is part of another irrational variant that suggest Rwanda needs Uganda and cannot survive without it.

Consider the fact that Rwanda is the gateway to Uganda’s goods to the DRC. However, entitlement has her convinced that Rwanda would allow those goods to transit through to the DRC while Uganda continues to intercept Rwanda’s goods transiting to Mombasa. In other words, the entitled are prepared for a border that operates one way – to allow Uganda’s goods in and through Rwanda while Rwandans cannot use it because they feel unsafe in Uganda and their goods get confiscated for in transit for no reason.

When I was researching this piece, someone who speaks one of Uganda’s languages told me a saying that goes [omuntu ensonyi azifula busungu!] that loosely translates to ‘when rationality fails one is bound to hide shame behind anger.’ Rather than iron out these constraints to trade, the entitlement mentality has conditioned Uganda to throw infantile tantrums the way a spoilt brat who perceives that he or she is being denied what rightfully belongs to them would do [ow’ entondo, in the same language].

Uganda would not run interstate relations with anyone else by throwing fits. However, it acts as if it should be able to when it comes to Rwanda.

Space doesn’t allow to consider all the reasons Uganda feels entitled to act as it does where Rwanda is concerned. Two shall suffice. One, Ugandans genuinely believe that all Rwandans came from Uganda and that they are indebted to them for having hosted them as refugees before they returned home in 1994. Ironically, none of the other countries in which sizeable populations of Rwandan refugees lived, feels comparably indebted. Moreover, among all the refugees, those who came from Uganda should be the ones not to feel any debt because they left having paid with their blood by liberating Uganda for Ugandans.

Second, Ugandans seem to be convinced that Rwanda shares only one border crossing-point with them. Otherwise, it would be irrational that they remain obsessed with the Gatuna border crossing if they knew that the two countries actually share three official border crossings, including Kagitumba-Mirama Hills and Cyanika. Unless, of course, there is a sense of entitlement that they should be able to cross in and out of Rwanda at border-points of their own choosing.

This entitlement mentality has those who rule Uganda thinking that they can continue to support armed rebel groups against Rwanda until the latter acknowledges the entitlement the former has over it. Most importantly, that Rwanda should sit back and absorb all Uganda’s provocations because if it retaliates Uganda will throw a tantrum like it is doing with the border. Is it irrational and selfish? Sure; but that’s what it means to have a sense of entitlement.